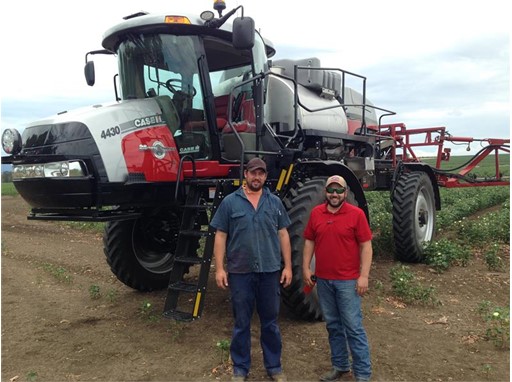 They’ve been around for the past 25 years, many of them in paddocks across Australia, and in honour of this silver anniversary, Case IH has given its Patriot sprayers an eye-catching makeover.
Case IH has announced it has manufactured a limited number of special 25th anniversary Patriot 4430 sprayers which are now available through dealers across Australia.The sprayers include a unique silver and red paint finish, decals highlighting the anniversary, and the very latest features, including the new AIM Command FLEX advanced spray technology.
Bellata, New South Wales, farmer Andrew Lowien recently took delivery of one of the specialedition Patriots, and the high tech features are already proving their worth.
“I haven’t done a lot with it yet, but it’s already living up to expectations,” Andrew said. “Just the stability of the boom, and the width – I notice I’m getting more done.”
Black Mountain is a property of more than 2700ha about 25km east of Bellata, which he farms with brother Grant, so Andrew appreciates the importance of a sprayer that can get the job done faster and more efficiently, with the latest in technological advances at his fingertips.
One of the features is the new Patriot’s AIM Command FLEX advanced spray system, one of the big selling points for Andrew when it came to getting a new sprayer.
“One of my neighbours had a Patriot and it’s been pretty tough for them in that it’s stood up to everything they’ve thrown at it,” he said. “So I took theirs for a run and liked it. I liked the boom stability and I’d researched a lot of the other features of the new system. I knew I wanted the AIM Command FLEX.”
This latest advancement in spray technology helps operators be more efficient without sacrificing accuracy, regardless of speed and terrain, resulting in higher potential return on investment in high dollar crop protection products. Features that will be beneficial to operators include the ability to adjust spray rates up to 30 per cent higher than the target rate on up to eight nozzles, and all with a single push of a button. In addition several levels of boom section control are available. This means the same machine has the flexibility to spray with seven boom sections, thirty-six sections or individual nozzle control, providing more precise control across the boom and throughout the field.
Andrew likes the comfort of the Patriot’s cab, too, and the fact outside noise is reduced to a minimum.
“The spaciousness of the cab is great and the lack of noise,” he said. “I’ve had another brand and it was just noisy – the constant, loud noise was getting to me after a while.”
The special edition Patriots include everything that has ensured the model has stood the test of time - including the cab-forward, rear engine design - while also offering Michelin tyres, Raven Industries technology and Wilger Combo-Rate nozzle bodies as standard equipment.
New Case IH family cab styling, 360-degree lighting package option and AIM Command FLEX (with no additional hardware needed) make it all the more attractive for those in the market for a new sprayer.
“When Case IH brought the first 4260 Patriots to Australia almost 20 years ago, it changed what growers thought of when it came to a self-propelled sprayer,” said Alyx Selsmeyer, High Horsepower and Sprayer Product Manager – Australia and New Zealand.
“Features like the cab-forward rear-engine design and near 50-50 weight distribution were as important then as they are now. Combine that with industry-leading technology to improve accuracy, and it shows why the Patriot has always been a strong machine in Australia.”
The special edition Case IH Patriot sprayers are available now. For more information, see your local Case IH dealer or visit www.caseih.com
13/04/17