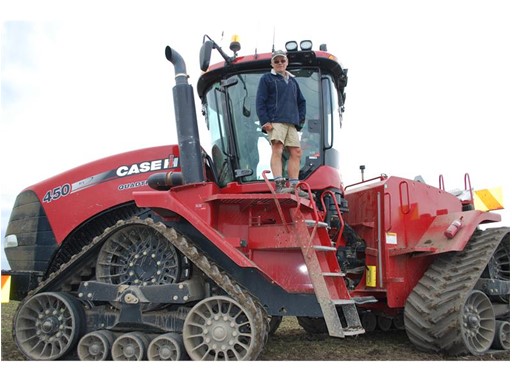 Ashburton farmer Eric Watson’s highquality Case IH machinery was an important factor in him achieving a Guinness World Record wheat yield this year. Eric and his wife Maxine broke the world record after producing a huge 16.791 tonnes per hectare on their 490-hectare farm near Ashburton.
The Watsons’ yield beat the previous record of 16.519 tonnes held for two years by a farmer in the United Kingdom. On average, irrigated wheat yields in New Zealand are around 12 tonnes per hectare.
The Watsons’ wheat crop was planted in mid-April 2016 and was harvested in February this year. In addition to cereals, Eric and Maxine produce pasture seed (ryegrass, fescue, chicory and plantain) and vegetable seed (spinach, radish, beet, pak choi and corn salad).
Eric takes a non-inversion approach to farming. He does not cultivate intensively and tries to minimise passes and compaction in his soils.
He says he is proud and a bit overwhelmed to have set a new record. Eric used a Case IH 9230 Axial-Flow® combine with front tracks to harvest the record wheat crop, which helped ensure superior grain quality.
Case IH introduced Axial-Flow single-rotor technology in 1977, and Axial-Flow combines have proven to produce the best grain in terms of both quantity and quality.
Axial-Flow delivers gentle grain-on-grain threshing and the whole system – from feeding to cleaning – the entire system is designed to minimise grain damage. “When you are threshing grain, the screenings are very low and split grain is low,” Eric says. “The system is very gentle on the crop and does very little damage. “I also like the simplicity of the Axial-Flow system. It has less moving parts and the hydraulic-driven rotor makes it easy to reverse if you ever get a blockage.”
Cochranes of Canterbury is Eric’s Case IH dealer and James Cochrane says Eric and Maxine’s record-breaking yield is stunning for a small country like New Zealand. He believes their Case IH 9230 Axial-Flow combine would definitely have contributed to their success. “The grain quality is one of the key fundamentals behind the Axial- Flow and the single-rotor design is important,” James says.
Eric used a Case IH 450 Quadtrac tractor to pull his seed drill when sowing the record wheat yield.
James says the Quadtrac’s track system reduces soil compaction, which can increase yields in certain soil types. Case IH has been using the four-track system for 20 years and James says they are vastly superior to two tracks. “There is less compaction from the four tracks, versus tyres, which means you can have a nice tidy paddock because of the way the machine pivots,” he says.
“The Quadtrac doesn’t screw up the ground and on the headlands, you get a better pivot. Two tracks make a massive big ridge on the headlands, but four tracks follow each other round neatly. Plus, you’ve got more traction because you have full power on the turns.”
Eric says a big advantage of the Quadtrac is the lack of slip. Whereas wheeled tractors can slip at rates up to 10 percent, he operates at slip rates of around one percent with the Quadtrac.
PALMERSTON NORTH – (9th May 2017)