Precision and comfort make the case for Patriot sprayer 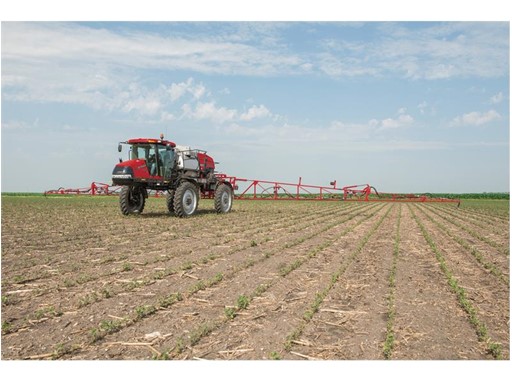 The efficiency of precise jet control, reliability, a rear engine and operator comfort are among the reasons Southern Mallee farmer Garry Summerhayes bought another Case IH Patriot® 4430 sprayer.
“This one has AIM Command PRO, so is an upgrade on the model we had before. The advantage with this is that instead of the machine being operated by spray jets grouped into seven sections, this has 72 sections. So every time you go across a diagonal on a headland it turns off individual jets, not whole groups. It’s far more precise and a big saving in inputs, and I can see that by looking at the litres on the screen. It’s good.”
But there’s another feature the Mallee-born-and-bred operator equally likes: turn compensation.
“As you turn a corner or around a tree, the outside of the boom speeds up to put more litres per hectare out, but the inside turns down really low, or even off, so you don’t get scorch in the corners. It’s a tremendous feature.”
Garry, his son (who is a fifth generation farmer) and son-in-law dryland farm in Victoria’s Berriwillock region. They use the Case IH Patriot 4430 across 6,075 hectares, on their own crops and also when contracting for a neighbour.
“We’d done 2,500 hours with our first Patriot 4430, and had very little trouble – very little. I really liked the features of the AIM Command PRO, so it was an opportune time to upgrade. We found very good resale value when we sold the first one, too. It’s very good.”
Besides the efficiency, Garry says there are several reasons he uses Case IH Patriot sprayers. High on the list is the ease of operation and design.
“It’s just logical to have the engine away from you at the rear of the machine. It’s quiet in the cabin compared with some of the oppositions’ front-mounted engines. As an owner-operator, I can spend many hours on the phone making business calls, and as the cabin is so quiet, I can do this easily on the sprayer.
“My son and son-in-law do drive it, but I do the majority. The well thought-out cabin comforts are really good. It’s fitted with a heated leather seat, and the positioning of the control panels make for easy operation. It’s a well-considered, purpose-built machine designed for the long hours farmers spend in the cabin.”
Garry — who also has a Case IH Steiger, Magnum and two Axial-Flow combine harvesters — says he’s very happy with the Case IH brand, and sees no reason to change.
“I’m very impressed with the Case IH machines. I encourage anyone who asks me to have a serious look at them.”
Having said that, Garry says the relationship with the dealer is paramount.
“If they didn’t look after me I’d consider going elsewhere. I get tremendous dealer backup from O’Connor’s group. As far as service goes, they’ve sold enough to know what to look for; they’re very good that way.”
Garry says the sprayer never sits in the shed. “Take a lentil or pulse crop, there are probably five trips over the field in a cropping season. Cereal crops aren’t as intense in their applications, but with everything we do, we’re always spraying.”
So far, the Summerhayes family has done 1,000 hours in the new Patriot — with no issues.
“Some of the operational features this AIM Command PRO gives you with individual control have proven to be really handy. For instance, there’s the flexibility to individually control jets for individual jobs, like putting a stronger concentration in the dust in summer behind the wheels. Also, there was a particular job I did spraying some windrows that had been left to burn; I wanted to put Roundup on the windrows but not on the rest of the paddock, and using the preset buttons — a bit like on a car radio — I was able to set a group of six or eight nozzles on one end and in another spot to match up with the windrows, but leave all the rest of the ground unsprayed. Setting the jetpack to spray different types of patterns is very handy and efficient.”
Garry says, “Having a little bit of individual control is a great feature and so is the productivity, but the attention to detail of the Patriot Sprayer are a stand-out.”
26/08/16