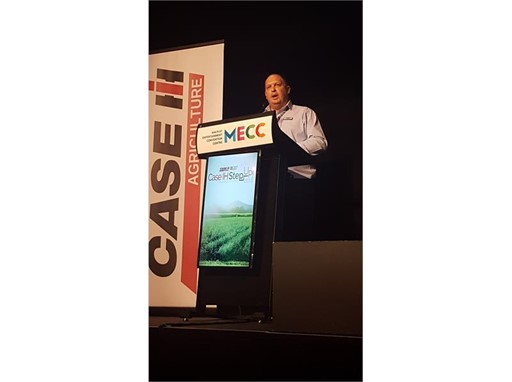 Though some of agriculture’s technology game-changers may appear to be a speck on the horizon, some aspects may be closer than we think, according to speakers at a major sugarcane conference in Mackay, Queensland.
The Case IH Step UP! Conference began on Monday with a dinner for delegates, a relief for organisers who were forced to postpone last year’s event due to Cyclone Debbie.
Robert Johnson, Regional Marketing Manager for Precision Solutions and Telematics with Case IH parent company CNH Industrial, addressed the conference this week. He discussed the future of innovation in agriculture, including Precision Ag and Case IH’s progress in the area of autonomous technology, highlighted by the 2017 unveiling of Case IH’s Autonomous Concept Vehicle (ACV), which visited Australia last year.
“Agtech offers improved productivity, along with quality and yield; it also offers enriched sustainability and less wastage,” said Robert. “We believe that the ongoing work on technology that has come out of the ACV’s development is the start of something amazing for agriculture.”
Robert said Case IH also valued its long association with the Australian sugarcane industry, and praised the innovation and drive that had made it such a success on the world stage.
“Sugar is the second largest export crop in Australia after wheat, and Australian producers have always been at the forefront of innovation and adoption of technologies that continue to drive the industry’s productivity.”
The Case IH Step UP! Conference is being held at the Mackay Entertainment and Convention Centre from 26th to 28th March, and will also include speakers Wes LeFroy from Rabobank, Danielle Skocaj from Sugar Research Australia, Lorelle Stables from QLD Agriculture Workforce Network, and Dr Karen Joyce from James Cook University who will discuss the impacts of drones on environmental management.
The conference, organised by Next Gen – the industry body for young sugar cane professionals – aims to encourage and support young people into a career in the sugar cane industry. Sponsored by Case IH since its inaugural event in 2013, the conference is a chance for both young and established farmers, millers, researchers and harvesting contractors to discuss and learn about innovation, sustainability and profitability, and encourages the transfer of knowledge between generations.
“The Case IH Step UP! Conference is a fantastic initiative, and one that we are very proud to put our name to,” said Pete McCann, Case IH General Manager, Australia and New Zealand. “Case IH has a long history with the sugarcane industry, which began with the development of the Austoft® harvester. The diversity of attendees opens up opportunity for really meaningful discussion about the industry and its potential in the future.”
Gerard Puglisi, Australian Cane Farmers Association (ACFA) director and Next Gen Officer, said, “We are excited to again have the support of Case IH this year. It’s really encouraging that a big global brand can see the value in young people in agriculture, and without the support from sponsors like Case IH, the Next Gen program would not be where it is today.”
Conference attendees will hear from 17 speakers addressing subjects including the future of precision agriculture, new sources of revenue from sugarcane, sustainability, environmental management and marketing and pricing, and will also have the chance to attend a series of field trips around spraying, fertiliser application, planter automation and the use of data sensors. A trade exhibition is also running at the convention centre on the Tuesday and Wednesday of the conference.
27/03/2018