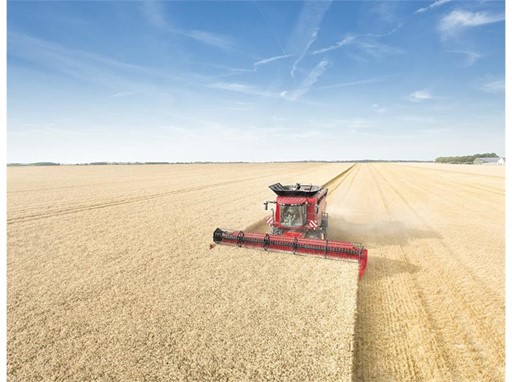 The Case IH Axial-Flow 140 Series combine was named on EquipmentWatch’s list of winners for the first Highest Retained Value Awards – the second time in a row that the brand has received the coveted title.
EquipmentWatch has given the 2017 Highest Retained Value Award to Case IH for its Axial-Flow 140 Series combine. The combine received the honour for its high performance and proven value on the market.
This acknowledgment comes in conjunction with Case IH’s 175th Anniversary, as well as the 40th anniversary of Case IH Axial-Flow single-rotor technology, which revolutionised combine harvesting with its simplicity, grain quality, grain savings, and crop adaptability.
Based in the USA, EquipmentWatch is world leader in data, software and insights for the heavy equipment industry. The prize recognises manufacturers in 28 heavy equipment categories – spanning the construction, agriculture and lift/access manufacturing sectors – for products that show the highest retained value over the last five years.
It calculates residual values according to market depreciation standards and proprietary algorithms, as well as fair market value and forced liquidation value records. EquipmentWatch’s analysts also examine year-over-year depreciation for more than 12,000 models and up to 20 model years of values.
According to EquipmentWatch, the Axial-Flow combines retain their value better than any combine available. “The Series boasts the brand’s lauded residue management system, built to handle the tough residue associated with new crop genetics. With an engine that produces 348 horsepower and a grain tank capacity of 300bu, this combine is an excellent choice for demanding farming needs” says EquipmentWatch’s statement about the Case IH award.
Axial-Flow 140 Series combines, consisting of three current models from 312 to 449 hp, are designed to meet the requirements of today’s demanding customers with mid-sized broadacre operations.
Everything about the Axial-Flow 140 Series is built to guarantee greater productivity and designed to help farmers harvest more, higher-quality grain, while adjusting to different crops and field conditions.
The combines feature the 2-speed electric shift ground drive transmission that provides easy gear and speed range selection and the high-capacity clean grain elevator. The Axial-Flow rotor provides smooth, consistent crop flow, while the Cross-Flow™ cleaning system helps eliminate side overload and reduces the need to slow down on uneven terrain.
The 2017 EquipmentWatch Highest Retained Value Award is further testament to the high quality of Case IH equipment as well as to the productivity, serviceability and reliability of these models.
27/05/17