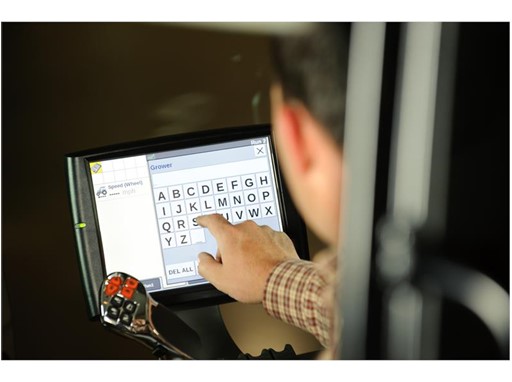 It’s been over ten years since WA farmer Phil Longmire completed his Nuffield Scholarship on increasing profitability through precision agriculture. The technology may have come a long way but according to Phil, his motivations remain the same.
“We continue to aim to increase the profitability of our own farming operation in an environment of tightening margins, and precision farming solutions help us to make a big impact,” he says. Phil runs a continuous cropping enterprise east of Esperance, and he relies on six Case IH AFS® Pro 700 displays and one FM 750 display on his fleet of Case IH machinery to manage herbicide resistance and improve the efficiency of his controlled traffic system.
“One of the strongest features for us is the ability to switch between tramline and boundary guidance auto-steer,” says Phil, who relies on this accuracy as a key tool to manage weeds and herbicide resistance.
“We sow paddocks 1.3 metres out from the boundary. This level of accuracy is really important as we slash around the paddock to remove two sown rows just before harvest. This reduces the chance of resistant boundary weed seeds moving into the header and being spread over the full 12 metre first lap, and ensures that we don’t increase the chance of resistance spreading quickly.”
Phil switched to continuous cropping in 2011, growing wheat, barley, canola and peas. He acknowledges the resistance issue is one drawback of the system but he’s also seen softer soils and increased yields as a result of the switch.
Some might say the transition is not yet complete, and others would say it’s a case of continuous tweaking, as Phil also uses his Case IH precision farming technology to redefine his paddock boundaries every year.
“Realignment of paddocks has been a big part of our program. We’re trying to improve the efficiency of our tramlining system by removing fences, realigning tree lines and making sure we can get the most out of it without too much overlap. With our variable rate boundary system it’s taken a while to get it right, so driving the headlands on autoguidance has certainly improved our efficiency,” Phil explains.
“We were averaging a 12% overlap in 2013, ranging from four to 33 percent. In liquid nitrogen alone this requires an extra 26,000L over the program which creates lodging and screenings. On one paddock alone in 2016, with Variable Rate Technology and paddock adjustments, our overlap has dropped by 14% showing an area sown of one hectare increase but a seven hectare overlap reduction.”
With seven displays across his fleet, which includes Axial-Flow® combines, MagnumTM and Steiger® tractors and a Patriot® sprayer, it’s important for Phil to keep a standard platform. “Having one platform across the farm makes it easy to help staff when there’s an issue,” says Phil, who also values the integrated nature of the Case IH AFS Advanced Farming Systems.
“We don’t want to spend the time setting it up. They’re set up by the Case IH dealership and designed to fit the machinery. If the system’s up and running it’s good for the operator.”
Farmers and contractors looking to upgrade their guidance systems should look no further than their local Case IH dealer. Case IH dealers are specially trained in Advanced Farming Systems, plus they have the local knowledge to support customers in the field.
For more information see your local Case IH dealer of visit www.caseih.com.
17/06/16