CNH Industrial back in the saddle for the Giretto d’Italia 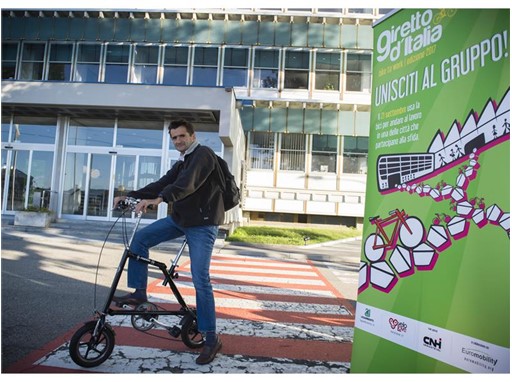 All 13 of the Company’s Italy-based plants participated in the seventh edition of the cycle-to-work initiative, which encourages cycling in urban centers and beyond, especially for commuting between home and work.
For the third consecutive year, CNH Industrial has participated as the main sponsor of the Giretto d'Italia, the “urban cycling championship” promoted by the non-profit association Legambiente with support from the Italian Ministry of Environment. The event itself aims to promote the development of bicycle-friendly urban centers. Now in its seventh year, the Giretto d’Italia is organized together with VeloLove in conjunction with Euromobility, and is part of the European Mobility Week (September 16-22).
Checkpoints were set up at the Company’s Italian sites to monitor the arrivals of all staff who chose to cycle to work. To further support this initiative, CNH Industrial offered employees the chance to win various prizes including bicycles and other merchandise, through a lottery organized by Legambiente. The plants were also competing among themselves to win a branded New Holland Agriculture folding electric bike, which will be awarded to the site with the largest recorded increase in bicycle use compared with 2016. The initiative involved more than 1,200 employees, a significant increase from the previous year.
The sites that participated are Brescia (which produces medium-duty commercial vehicles), Bolzano and Vittorio Veneto (defense and civil protection vehicles), Jesi and San Matteo (tractors), Modena (components for agricultural machines), Piacenza (quarry and construction machinery), Pregnana Milanese (marine engines), San Mauro (construction equipment), Suzzara (light commercial vehicles) and Turin (administrative offices and engine production). The sites in Foggia (engine production) and Lecce (construction equipment), which are difficult to reach by bicycle, participated in the initiative by promoting the use of public transport and carpooling.
“Improving the wellbeing of our employees and favoring the use of sustainable transport are among the Company's main goals,” explained Daniela Ropolo, Sustainable Development Initiatives Manager for Europe, the Middle East and Africa at CNH Industrial. “Each year, we are able to offer employees more comprehensive eco-friendly transport solutions for traveling between home and work, such as company shuttle buses and carpooling programs. The participation of all of our Italian sites demonstrates CNH Industrial’s strong involvement in the local communities where we operate. Further demonstration of this commitment saw the Company recently named as Industry Leader in the prestigious Dow Jones Sustainability Indices World and Europe for the seventh year running, which confirmed the entire Company’s commitment to sustainability.”
London, September 21, 2017