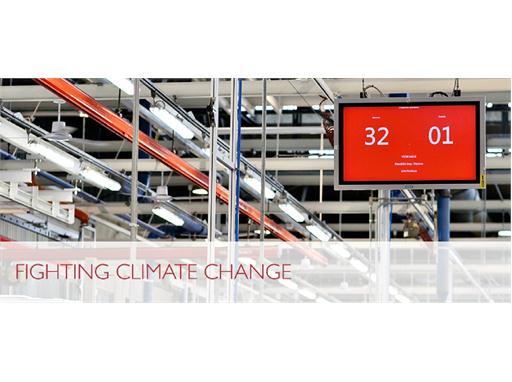 The company has been recognised as a leader for its performance and the depth and quality of its data on climate change reduction disclosed to investors and the global marketplace through CDP, the international not-for-profit organization that drives sustainable economies. CNH Industrial’s status is awarded with a position on the CDP Italy Climate Disclosure Leadership Index (CDLI), released today in the CDP Italy 100 Climate Change Report 2014.

CNH Industrial N.V. (NYSE: CNHI / MI: CNHI) further confirms its position among the global leading companies in climate change transparency. The company received a top disclosure score of 98 out of 100 in the CDP Italy Climate Disclosure Leadership Index (CDLI), which was released today through the CDP Italy 100 Climate Change Report 2014. This disclosure score adds to the A performance ranking it received last month in The CDP Climate Performance Leadership Index 2014.

CDP is an international, not-for-profit organisation, which works with market forces, including 767 institutional investors, to motivate companies to disclose their impacts on the environment and natural resources and take action to reduce them. CDP disclosure scores are provided to investors and other decision makers through various channels, including Bloomberg terminals. This assists these stakeholders in assessing the corporate preparedness for changing market demands and emissions regulation.

The attention garnered by the CDP Italy 100 Climate Change Report addresses the accountability of businesses to disclose their contributions to the reduction of the impact on climate change. CNH Industrial has enforced 149 improvement programmes, investing a total of 7.6% of the company’s energy spending in improving its worldwide energy performance in 2013. This substantial investment lead to a reduction in energy consumption of over 194,000 gigajoules (GJ), which is equivalent to 12,437 tonnes of saved CO2 emissions. “This achievement demonstrates the success of our global approach to environmental responsibility,” commented CNH Industrial CEO Richard Tobin. “It is thanks to the work of organisations such as CDP that our commitment to being a responsible company receives due recognition.”

CNH Industrial has long championed global efforts to reduce its overall impact on the environment. As a consequence, the company regularly provides data of its worldwide activities through its Sustainability Report. The 2013 edition can be found on the corporate website at: http://csrreport2013.cnhindustrial.com/​​. In addition to its inclusion in the CDP Italy 100 Climate Change Report 2014, CNH Industrial received an acknowledgement at the awards ceremony held today at the Milan Stock Exchange in Italy. The award was accepted by Giorgina Negro, CNH Industrial Energy Coordination Manager, on behalf of the company.