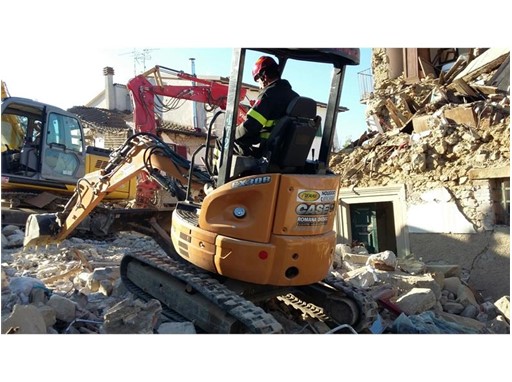 As the earthquake threats persist in central Italy, the Company has already supplied the Italian Fire Service with more than 25 vehicles and machines, including excavators, minibuses and generator sets. In addition, the Italian Red Cross was presented with a cheque for USD $150,000, half of which was donated by employees and the other half matched by the Company.
Less than three months following the earthquake that struck central Italy in August, and while the area has once again experienced new tremors, CNH Industrial continues its actions to support the affected population.
From the very first stages of the rescue work, the Company began working with the authorities in charge of relief efforts, including the Italian Fire Service and civil defence corps, to make its extensive range of vehicles and expert personnel available to provide support.
Specifically, Case Construction Equipment (CNH Industrial's construction equipment brand) loaned 19 vehicles to the Cittareale (Rieti) and Ascoli Piceno fire services, including crawler excavators, mini-excavators, wheel loaders and skid-steer loaders.
Major contributions also arrived from the Company's other brands. FPT Industrial (powertrain) provided seven generator sets; Iveco Bus delivered three minibuses; Iveco and Iveco Astra supplied several heavy goods vehicles (including dump trucks) to assist with possible future needs. Finally, New Holland Agriculture auctioned a tractor, donating the €31,000 proceeds to the Italian Red Cross.
Acting again through the Red Cross, the Company set up an internal fundraising channel. Employees in the EMEA (Europe, Middle East and Africa) and NAFTA (North America) regions, with the contribution of the CNH Industrial Foundation, donated USD $75,000, a figure that was subsequently matched by the company to make a total donation of USD $150,000.
London, 14 November 2016