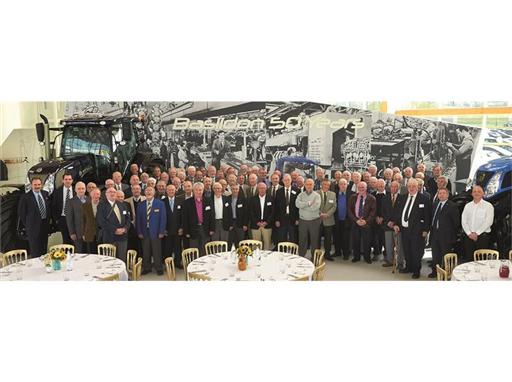 New Holland kicked off the golden jubilee celebrations of its flagship tractor factory​ in Basildon by reuniting over 70 veteran workers who clocked in on its opening day 50 years ago.

Since the plant’s launch in 1964, more than 1.8 million British-made machines have rolled off the now two-kilometre production line. The site employs 1,000 people, makes 23,000 tractors each year, and uses 600 tonnes of material every day.

To mark half a century of achievements and to thank dedicated employees, on Thursday March 13th New Holland Managing Director Andrew Watson welcomed the guests in the Customer Centre, prepared in a special 50th anniversary livery, before inviting them to a guided tour of the plant and a special lunch in the inspiring state-of-the-art show room.

At the event was one of the early plant managers, 73-year-old Bob Friedlander, who was in charge from 1985-92 but first arrived in 1963 as a graduate trainee.

He said: “The whole assembly site has moved forward in leaps and bounds. It’s become far more efficient and safer. We’re all thrilled to see the Basildon plant still exists and is going from strength to strength.”

The first models produced were the Ford 3000, 4000 and 5000 series but Basildon is now home to the powerful and popular T6 and T7 ranges. They fly the flag for British manufacturing in 120 export markets worldwide, helping to make New Holland one of the UK’s top 15 exporters.

As well as investing in the local area, the site has grown into a centre for New Holland’s technological and environmental advances. It is capable of producing 14,500 bespoke combinations of specifications.

“It’s like stepping into the future,” commented Francis Perkins (73), a former forklift driver, after finishing the tour.

Don Ayrton (83), who worked at Basildon for 29 years, added: “It’s beautifully clean and unbelievably efficient. The working environment is infinitely better and it’s very, very modern and the quality that is being produced now is better too.”

Recent high points at the factory have included the opening of the new Customer Centre​ in 2011, a visit by Prime Minister David Cameron​ in 2012, and in 2013 when the Customer Centre was expanded with a dedicated show room.

The current Plant Manager, Colin Larkin, himself started on the assembly line in 1985. He said: “It was a pleasure seeing so many familiar faces back at Basildon and that such experienced workers were all so impressed with how it has developed and improved.

“In 50 years it’s become a much more modern plant producing a much more sophisticated product, which is thanks to the investment which has also created the dedicated Customer Centre.

“I think the reunion highlights the camaraderie and our long history. About half the current workforce is from Basildon and it shows the local people too that we’re here for good.”

Andrew Watson added: “The reunion is important for us because the people who set up the plant in 1964 are actually part of the heritage of the New Holland brand and culture of the factory.

“The fact that the plant is the only tractor factory left in the UK is something they can take pride in. It’s a strategic plant for New Holland because the products we make are an increasingly important segment in the tractor market.

“The plant has a tremendous amount of flexibility for the future, it’s perfect logistically, and we’re not looking to go anywhere else. We’re here to stay; modernizing, training and serving the customer. We’re in for the long haul.”