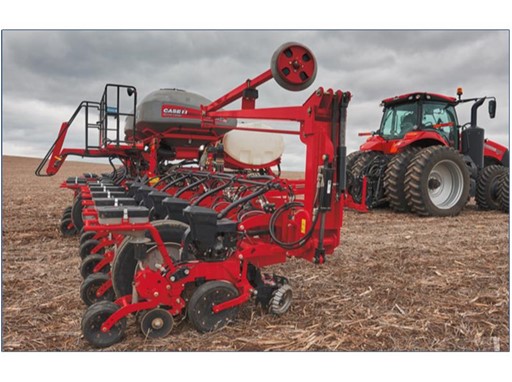 Producers can customize their planter with the right amount of technology for their operation
Case IH revealed the all-new 2000 Series Early Riser® planter to media and attendees at the opening of the National Farm Machinery Show in Louisville.
“From all-new cast iron components to an electrically driven low maintenance metering system to the entire toolbar, we redesigned every inch of the new Early Riser planter,” explained Tony McClelland, Case IH planter marketing manager. “It was all based on direct customer feedback and field-testing. We made sure that this new planter is not only extremely accurate, it’s also robust enough to deliver precise placement across all terrains, crop types and speeds for faster, more uniform emergence.”
Announced in November 2015, the new 2000 series Early Riser planter is the first to factory-integrate industry-leading seed placement technologies from Precision Planting® into a completely new system featuring a best-in-class, all-new, rugged row unit.
Designed for modern seed types, treatments, populations and conditions, the new planter can be easily customized to a range of soil types, terrain, fertilizer/chemical application needs and varying crop residue management practices. Plus, a streamlined design and tool-free crop changes and adjustments result in simpler maintenance.
Four Levels of Planter Technology for 2016
Case IH also detailed a four-tier planter offering for a variety of farm operations at the event. This offering features four levels, ranging in price, customization and factory-readiness — the highest tier being the new 2000 series.
“The Early Riser planter family set the agronomic standard by providing the industry’s only flat-bottom seed trench, leading to earlier, more uniform emergence and higher yields,” said McClelland. “Building on this legacy, we’re excited to give producers the opportunity to work with their trusted Case IH dealers to customize their existing, new or future planter with the right amount of technology to meet their needs.”
Retaining the agronomic value of the Early Riser planter series, each unique offering ensures consistent in-row spacing, accurate depth control, uniform soil density and good seed-to-soil contact.
1. The New 2000 Series — All-new, rugged row unit features factory-integrated Precision Planting components
As the first planter series built with factory-integrated Precision Planting technology, the new 2000 series Early Riser planter allows producers to customize their planter — direct from the factory. Built with heavy-duty cast components, the 2000 series stands up to high speeds and tough, fast-changing conditions. A 26-inch toolbar clearance, plus a 60 percent increase in vertical row-unit travel, helps accommodate uneven terrain without sacrificing accurate seed depth and consistent closing — even at speeds up to 10 miles per hour.
Developed specifically for the 2000 series, the all-new vSet® 2 meter and vDrive® electric drive deliver accurate and consistent seed singulation, populations and in-row spacing for a variety of crop types. This new metering system, combined with DeltaForce® hydraulic down force and row-by-row shut-offs for seed, liquid fertilizer and chemical, allows each row unit to react individually to changing conditions for better seed placement. Additional new features that can be customized from the factory include the Advanced Seed Delivery™ (ASD) system for the most accurate seed delivery and placement from the meter to the furrow.
First models, including 12-, 16- and 24-row 30-inch front-fold machines, will be available for the 2017 planting season.
“Of course, not everyone is in an operation that requires the ultimate in cutting-edge planting technology,” added McClelland. “But every operation can benefit from some level of technological improvement in planting accuracy. That’s why we’ve outline three other alternatives for 2016.”
2. Factory deduct lets producers customize their planters to their exact specification on select 1200 series models
Case IH continues to offer an industry-exclusive deduct on certain components to producers who order certain 1200 series Early Riser planter models with Precision Planting technology. Built with less mechanical components, their new planter will arrive at the dealership ready to accept the technology they desire. This includes the vDrive with vSet electric meter-drive system for optimal seed placement and accuracy, in-cab adjustable CleanSweep® residue managers and DeltaForce hydraulic down force for uniform depth across varying soil conditions.
3. 1200 Series — Conventional Early Riser planter offers field-proven technology from the meter to the seed trench
The Advanced Seed Metering (ASM) technology on the 1200 series Early Riser planter set the industry benchmark for consistent in row spacing and plant population accuracy. Proven on operations across the country, this system allows producers to plant a wide variety of seed types and sizes at high plant populations. The 1200 series features many other Agronomic Design™ advantages, including the two-stage closing system, furrow firming point, seed protection shoe and exclusive pulled gauge wheels. Case IH dealers are offering exceptional deals on these models.
4. Used Equipment — Upgrade early models with the latest Case IH technology
Through unprecedented discounts and special interest-waiver programs, producers can upgrade to the technology they desire on certain used late-model Early Riser planters through participating Case IH dealerships. If producers wish to modify these models with Precision Planting components, their Case IH dealer is uniquely suited to modify existing models to the level that’s best for their farm.
For more information about these four unique planting opportunities, visit your Case IH dealer or caseih.com/rethink.​​
LOUISVILLE, Ky. (Feb. 10, 2016)