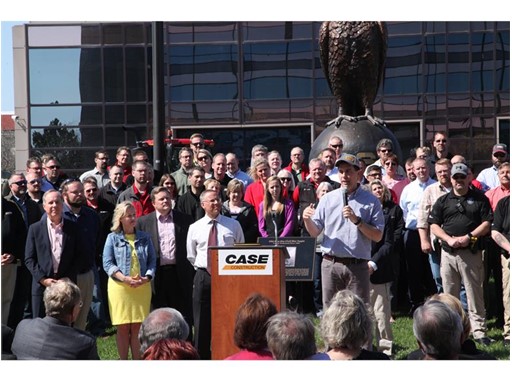 CASE named as one of twenty-seven state suppliers and contractors who will perform work on the new Foxconn development in Racine County, Wis.
Wisconsin Governor Scott Walker and a delegation of business leaders, elected officials, contractors and Foxconn representatives named CNH Industrial (NYSE: CNHI /MI: CNHI) brand CASE Construction Equipment among the 27 state contractors and suppliers who will perform work on the new Foxconn development in Racine County, Wis., USA. The announcement was made during a statewide tour on Monday, which culminated in an event at CASE headquarters in Racine. Governor Walker emphasized the effort to ensure Wisconsin suppliers and contractors take a prominent role in the construction project.
The $10 billion manufacturing site planned for Mount Pleasant, Wisconsin, is estimated to create 10,000 construction jobs each year for the next four years. M+W | Gilbane, the lead contractor on the project, announced at an event in April that 90 percent of contractors for the initial site work would come from the state of Wisconsin, with a total of 10 percent coming from Racine County.
“Today we are seeing more of the Foxconn Bonus throughout Wisconsin,” said Governor Walker. “It is clear that Foxconn is putting Wisconsin first with its 27 selected in-state subcontractors for Wisconn Valley Science and Technology Park’s first phase of development. It is great to see Wisconsin businesses and working families from all over our state benefitting from this historic investment.”
“The infrastructure modernization in southeastern Wisconsin to attract world-class manufacturing and development can be seen as the blueprint for justifying investment in local infrastructure in other parts of the country,” says Michel Marchand, vice president, CASE Construction Equipment. “The thousands of jobs it brings to the area, including those supported by the contractors and suppliers named today, and the expected demand for increased retail and home sales, represent just a few of the ways this development benefits the local economy and people right here in Racine County.”
CNH Industrial has 11 manufacturing plants, 12 research and development centers, and a workforce of 9,000 in North America. The Company designs, produces and sells ‘machines for work’, and is present in all major markets worldwide giving it a unique competitive position.
Burr Ridge, May 9, 2018