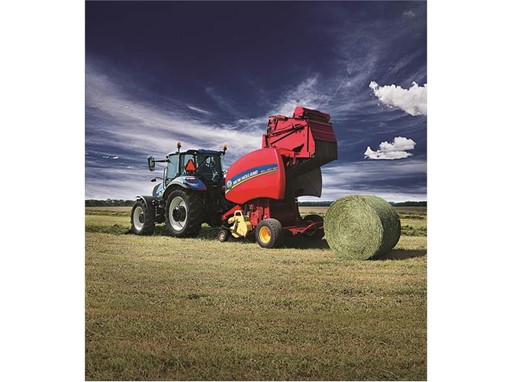 New Holland Agriculture upgrades its Roll-Belt™ variable chamber balers with silage functional improvements and the new IntelliBale™ system. These improvements to the latest generation of this market-leading baler range further raise the bar on performance and efficiency.
“New Holland has been an innovator in the Roll-Belt baler segment for over 25 years, introducing pioneering firsts that have changed the way variable chambers operate today,” said Seth Doman, Hay & Forage Marketing Segment Leader with New Holland North America. “This is such a successful baler that there are more than 235,000 of them at work in fields around the world. The latest generation redefined round baling with its outstanding capacity, bale density, easy servicing and ease of use. But at New Holland we are never satisfied. We are already reaching higher by introducing new features to improve this outstanding range even further.”
More uptime, increased productivity and continuous day-after-day operation in silage
The silage improvements to the Roll-Belt baler ensure that it delivers a consistently top-notch performance in all crops and moisture levels. It also improves productivity by maximizing uptime.
An innovative new dual follower roll sledge assembly replaces the single looped follower roll with scraper of the previous models. The smooth front roll and looped rear roll rotate together, preventing the crop that accumulates on top of the scraper and behind the belts in the follower roll area from wrapping on the rolls, which can lead to belt slippage or stalling in difficult silage conditions. This improvement eliminates the need to stop and clean crop from the roll and scraper, increasing the baler’s uptime — with consequent benefits to productivity.
In addition, the single looped nose roll with scraper in the tailgate has been replaced in the new models with a smooth front roll and spiral looped rear roll. The rotating action of the latter prevents crop from wrapping at the nose, while a gap in the tailgate side sheet allows crop to be expelled from this area. This eliminates the need to clear crop from the nose roll and improves the tailgate structural durability.
More productivity, reduced fatigue, uniform bale size and less fuel consumption, all with the new IntelliBale™ system
The IntelliBale system is now available on 450,460 and 560 Roll-Belt Round Baler models and can be paired with ISOBUS class 3 compatible T6 and T7 AutoCommand™ tractors and T7 Full Powershift models with electronic park brake. The system automates the tractor and baling control functions, reducing operator fatigue and fuel consumption and enables the baler to control the tractor’s motion, net function, and bale ejection. This technology enables the baler to control the tractor’s forward motion. It brings the tractor to a stop when the preset bale diameter has been reached, wraps the bale, raises and closes the tailgate when the bale has been ejected and then gives the operator the signal to cycle the FNR lever forward and back to neutral to continue baling.
In addition to reduced operator fatigue and fuel consumption, customers will appreciate the uniform bale size that is achieved with the IntelliBale technology, since bale diameter is automated and doesn’t depend on the operator’s reaction time. The consistent cycle times also increase the baler’s productivity even further.
(August 30, 2016)