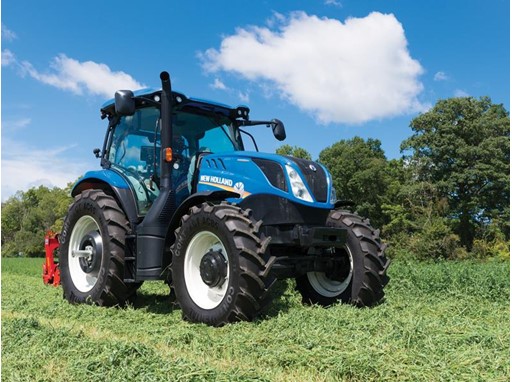 New Holland Agriculture is expanding its acclaimed T6 tractor series with the new T6 Dynamic Command™. The new T6.145, T6.155, T6.165, and T6.175 Dynamic Command models are the only tractors in this segment featuring the new 8 step semi-powershift dual clutch transmission on the market, providing operators with a new option to further improve their productivity. The new transmission reduces the number and improves the quality of gear shifts during operation, making these tractors a valuable asset to the fleets of dairy and livestock producers, hay and forage operations, and row crop farmers.
“The T6 Dynamic Command was developed directly as a result of key customer input,” said Daniel Valen, Director of Product Marketing for New Holland North America. “While many customers liked the Electro Command™ transmission, they were looking for more gears in each working range, a more efficient shuttle, and of course, an affordable price. We were able to deliver on these requests with the T6 Dynamic Command.”
With these new models, New Holland provides its customers with even more choices. Customers who are looking for an entry-level tractor for use in the yard and light field applications can opt for the T6 16x16 Electro Command™ with 4 step semi-powershift; those requiring a multipurpose tractor for tillage, haying applications, and loader work can choose the new T6 24x24 Dynamic Command; and customers who are looking for luxury performance when exact speeds are critical can find the perfect solution in the award-winning T6 Auto Command™ with continuously variable transmission.
The all new 24x24 Dynamic Command transmission allows the tractor to use less power during operation when compared to the Electro Command transmission, meaning the customer sees higher work rates with less fuel usage. At the heart of the 3 range, 8 step semi-powershift transmission is a dual clutch concept, similar to that which operates the seamless range shifting in the New Holland Auto Command transmission.
The new features of the T6 Dynamic Command make a full day’s work easy by increasing productivity and decreasing fatigue, meaning operators can get more done in less time while staying more comfortable.
Two versions of the SideWinder™ II armrest, New Holland’s multi-award-winning console, are available to controlling the T6 Dynamic Command. Choose from either electronic hydraulic remote valves or mechanical valves. For the mechanical option, the integrated control panel has been repositioned to the front of the armrest to provide unobstructed access to the mechanical remote levers on the right hand side.
The CommandGrip™ multifunction handle is taken from the Auto Command CVT tractors. Pushing the force-based version of the CommandGrip forward will shift up gears, and pull backward to down gears. Engage reverse and the logic cleverly reverses, pulling backward upshifts, a common logic to the established speed control on the Auto Command. While operating in Ground Speed Management mode, pushing forward will accelerate the tractor towards the requested target speed, pulling backward decelerates the tractor.
To create the perfect front end loader tractor the T6 can now be specified with CustomSteer™, a new variable ratio steering feature that delivers the full maneuverability of the T6 with reduced turns of the steering wheel. Repetitive maneuvering while loading is made easy, just one rotation of the steering wheel can turn the steering fully from left to right while still maintaining precise control. Add in the brake to clutch feature, a high flow hydraulic pump, an advanced loader joystick with transmission controls, the high visibility roof and you can see why the T6 Dynamic Command is perfect loading tractor.
The T6 Dynamic Command can be offered with ISOBUS Class 3 capability. Hitched to a New Holland round baler with IntelliBale™, the baler can stop the tractor when a bale is formed, eject the bale and close the tailgate. The driver simply presses the shuttle button to resume baling.
New Holland’s philosophy is that advanced features should deliver benefits and not bring complication for the operator. Ease of use is a fundamental design criteria and the T6 Dynamic Command is no exception to this rule.
Fueling Innovation exemplifies the entrepreneurial spirit of finding alternative fuel sources, but it also follows our legacy of over 120 years of creating innovative and practical products for agriculture. From our Precision Land Management strategies, such as the NHDRIVE autonomous vehicle concept and our dedication to being the Clean Energy Leader, New Holland is committed to finding new and better ways to make innovative equipment accessible and more productive.
New Holland, Pa. (August 29, 2017)