Into the Wild: P3 for the Greater Good 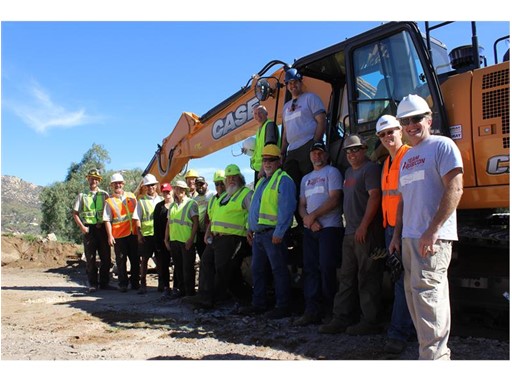 Partnership between CASE, Team Rubicon, U.S. Fish & Wildlife & National Wildlife Refuge Association helps improve refuge land and train equipment operators for disaster
response.
Public-private partnerships (P3s) come in all shapes, sizes and levels of complexity. In some cases, complexity is minimal and it’s as simple as a private organization working with non-profit groups for the greater good of all.
The working relationship between CASE Construction Equipment​, the National Wildlife Refuge Association​, U.S. Fish & Wildlife​ and Team Rubicon​ is that kind of partnership.
As part of CASE’s Dire States​ initiative, the company has been advocating for state and local government to find new and creative ways of investing in its infrastructure. The company has also been a vocal supporter of federal efforts, such as the new highway bill that passed late in 2015.
The role of Dire States has shifted from its initial goals of awareness to an active role in advocacy and getting work done. It was in that spirit that CASE and the Refuge Association began discussing ways to help complete project work on wildlife refuges throughout the U.S.
But what does that have to do with infrastructure?
Using the American Society of Civil Engineers (ASCE) Infrastructure Report Card​ as a guide, public parks and recreation​ is one of the 16 core categories of American infrastructure, and as of the last national report card, it rated a C-. While not obvious “infrastructure” when compared to roads, ports, or airports, these green spaces provide both a critical habitat for wildlife throughout the country and an economic boost to the regions where they are established.
“The National Wildlife Refuge System, in 2014, had over 47 million visitors,” says Cynthia Martinez, chief of the National Wildlife Refuge System. “We actually created about $2.5 billion in the local economies around which national wildlife refuges occur, and we contribute about 35,000 jobs for local communities surrounding national wildlife refuges around the system.”
CASE, the Refuge Association and representatives of the National Wildlife Refuge System began identifying projects that required earthmoving equipment to complete.
“Restoring wildlife habitat often takes more than science – it takes heavy equipment and skilled operators, so we were thrilled to connect CASE to our colleagues at the Refuge System to help with some important restoration projects,” said Christine McGowan with the Refuge Association.
Finding the projects was easy. Finding operators who could take the time off of work to travel and complete the projects? That was more difficult.
Enter Team Rubicon.
Team Rubicon is a disaster relief and medical aide organization comprised mostly of veterans, but also staffed with first responders and passionate/skilled civilians looking to assist in relief efforts both in the U.S. and abroad. Team Rubicon and the National Wildlife Refuge System had already been in talks about performing heavy equipment training on wildlife refuge sites – marrying the two efforts and creating a larger partnership between the three organizations proved the smartest path forward.
“In Team Rubicon, we see a group that is doing good in the community and is also providing excellent training and skills development to its members,” says Brad Stemper, solutions marketing manager, CASE. “These folks are skilled and disciplined – they’re the people you want to see coming into your community to help after a disaster. It’s been our privilege to work with them.”
The connection between each of the three organizations was made, and soon equipment was shipped to two different wildlife refuges – Laguna Atascosa​ in Texas, and the San Diego National Wildlife Refuge​ complex in California. There, two separate groups took the first phase of equipment safety training on their way to becoming trainers for their own regions back home. That training will be complete after a final “Train the Trainer” event at the Minnesota Valley National Wildlife Refuge​ in April.
During the initial events, training focused on the safe operation and maintenance of construction equipment. Team Rubicon members, under the guidance of U.S. Fish & Wildlife representatives, completed project work at each location once the official training was complete.
In Texas, that work included rebuilding an earthen boat ramp – the only one of its kind on the property – to provide access to the waters of the refuge. A catch basin and culvert were also installed on the road leading to the boat ramp to prevent erosion that regularly washed it away. Aggregate was also loaded and hauled to strategic spots throughout the refuge for future use in road grading and other support applications.
In California, the site of a structure fire from a past wildfire was demolished and the site was reclaimed to nature. Additional site demolition and cleanup work was also completed.
“We’re really happy that we’re here partnering with CASE, Team Rubicon and the National Wildlife Refuge Association to do some of this equipment work on Bahia Grande, because it’s not every day that we get this brand new equipment to work with and a whole lot of staff to come out and work on that equipment,” says Boyd Blihovde, refuge manager at Laguna Atascosa. “It’s just really awe inspiring to see these guys and gals that served their country, and they’re out here doing this work voluntarily and getting this training so they can help their community. It’s really neat.”
“This is a partnership that will continue to see results for years to come,” concludes Stemper. “The training will serve Team Rubicon well, both as they go back home and work in their day-to-day life, and as they perform disaster relief work and help communities here and abroad. It will keep paying forward each time they step on a new site.”