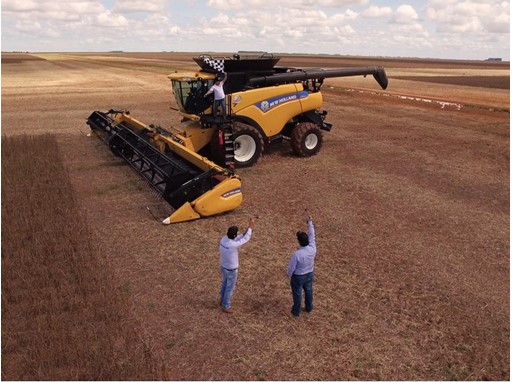 New Holland Agriculture, a brand of CNH Industrial (NYSE: CNHI /MI: CNHI), has set a new world record in soybean harvesting in the Bahia State of Brazil. The feat involved harvesting a massive 439.73 tons of soybean in eight hours with the brand’s CR8.90 combine harvester. It was certified by independent adjudicator RankBrasil.
The CR8.90 delivered this outstanding performance in exceptionally high yield crop: 4,886 kilograms per hectare, far above the average of 3,600 kilograms in Brazil. The model follows in the footsteps of the CR10.90, which has held the world record title in wheat​​ since 2014. The records set by both combine models demonstrate the exceptional capacity and productivity of the CR Series combines.
The record was set on April 5, 2017 at the Villa Panambi farm with the support of local dealer Jaraguá Bahia. Moisture was high on the day due to 20 millimeters of rain at 5:00 a.m., and temperatures ranged from 25 to 28 degrees Celsius. Harvesting started at 10:30 am and finished at 6:30 pm, resulting in approximately 90 hectares of harvested land. The CR8.90’s average harvesting throughout was 54.97 tons per hour for a crop yielding average of 4.88 tons per hectare and an average moisture content of 17%.
CR combines are able to achieve outstanding performance thanks to New Holland’s signature Twin Rotor™ technology, their powerful and efficient FPT Industrial engines and New Holland’s harvesting technologies such as IntelliSteer® auto guidance, which enables operators to harvest around the clock.
New Holland announces this important achievement ahead of Agrishow, the largest and most comprehensive agricultural technology trade show in Latin America, which takes place annually in Ribeirão Preto, a municipality located in the northeastern region of the state of São Paulo, Brazil.
London, April 26, 2017