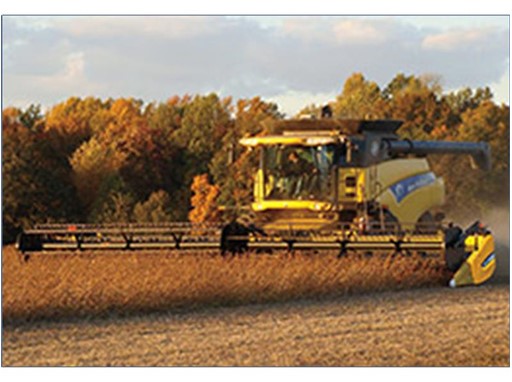 As the popularity of combine draper headers grows, New Holland has fully met the demand with two New Holland-engineered and manufactured draper headers specifically designed to maximize the high-capacity performance of New Holland’s CR Series Twin Rotor® and CX8000 Series Super-Conventional combines.
“Header design plays an important role in reducing harvesting losses,” says New Holland Combine Marketing Manager Nigel Mackenzie. “With the increasing sophistication of combine technology, it’s especially important for growers to be sure their header is built with the features that will be fully compatible with their combine. With New Holland draper heads, New Holland combine owners can maximize their productivity in the field.”
Tim Radke, president of Alta Implement, a New Holland dealership in Alta, Iowa, cites the example of one of his customers, a grower who when faced with hail-damaged beans, decided on a New Holland draper head. “Many of the beans were down and the pods split,” Radke explains. “An auger head has a greater tendency to pop the beans out of the pod, but a draper head has a more gentle feeding action, which puts more beans in the tank. At $13-$14/bushel beans, more beans in the tank is more money in the bank.”
Last year, Ty Brown, a cash crop producer in Rossville, Indiana, experienced the efficiency of New Holland’s new flex draper head first-hand when he used it to harvest seed beans with his New Holland CR9070 combine. “One of the biggest advantages is the greater efficiency we got out of our New Holland combine. It used to be the header was the limiting factor – now the only thing that limits us is the capacity of the combine. The draper header is a simple design. It feeds very evenly, and that helps the combine do a better job of threshing the beans, with fewer splits, therefore more value. You have the simplicity associated with an auger head, and advantages in line with the draper, and you get the best of both worlds in one head. We put a lot of acres on it last year. It was an awesome investment.”
New Holland draper heads are designed with industry-leading features. The award-winning New Holland SynchroKnife™ drive is a patented center knife-drive system that revolutionizes the way a combine header cutterbar is driven. It eliminates header vibrations, and reduces overall header loss, putting more crop in the grain tank. This system works on the same basis as the two opposing knife drives, but eliminates the vibrations they can cause by keeping the opposing knifes perfectly synchronized. The drive also eliminates complex drivelines, reducing maintenance needs and saving power. Having the drive in the center of the head reduces the end shield width to minimize rundown of standing un-cut crop. This cutting-edge technology was presented with a prestigious AE50 Award by the American Society of Agricultural and Biological Engineers (ASABE) as one of the 50 most innovative product ideas to hit the market in 2011.
New Holland 840CD rigid draper headers are available in cutting widths of 25’ 30′, 35′, 40′ and 45′. A six-bat New Holland-designed cam reel smoothly feeds crop to the cutterbar and draper belts, helping to reduce header loss. Perfect for cereals, grains and specialty crops,
New Holland’s 880CF SuperFlex draper header provides ground-hugging flotation so farmers can harvest every bit of their valuable crop. The 880CF SuperFlex draper headers are available in cutting widths of 30′, 35′, 40′ and 45′.
In addition, a slow speed transport kit is available to make it easy to switch from field to field easy. The system uses wheels that fold down hydraulically from the combine cab with a hitch attached by hand so the header can be towed with the combine. A process that used to require two people, a trailer and a tow vehicle can now be handled by one person.
NEW HOLLAND, Pa. — May 14, 2013