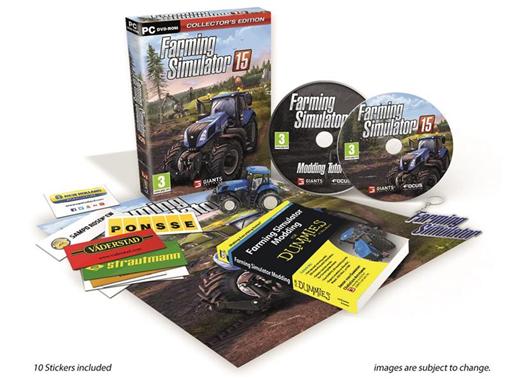 A full range of New Holland Agriculture equipment will be featured in the fifth generation Farming Simulator computer game, developed by Giants Software GmbH. This game, which is the most successful and widely played farming simulation package, will include New Holland tractors, combines, headers, balers and material handling equipment to provide users with a realistic “virtual” farming experience.
Various farming environments, including arable, livestock and poultry enterprises, have been developed and gamers will be able to select a New Holland machine for every task. Furthermore, as users increase their expertise, they will be able to “trade-up” their equipment, and can aspire to own the world’s most powerful combine, the 653 hp CR10.90.
The New Holland products available for the avid virtual farmer include the T4.75 PowerStar™ tractor, perfect for the budding livestock farmer, who could upgrade to a T6.160 tractor equipped with a 750TL front loader. The largest row crop farmers will cultivate with the T8.320 or T8.435 tractors, the latter equipped with SmartTrax™ technology, or go all-out for the articulated four-wheel-drive T9.560 tractor. They can reap what they sow with the mighty CR10.90 Twin Rotor® combine, equipped with either a 12-row corn header or the impressive 41-ft. VariFeed™ grain header. A BigBaler 1290 could also find a place in their fleet. More modest operations will find products to suit their needs with a conventional combine, six-row corn header or 18-ft. VariFeed header, and the Roll-Belt™ 150 variable chamber round baler.
An online version of the simulator is also available, so users can enhance their farming experience in multiplayer mode.
To discover more, a preview video is available at: http://youtu.be/w-3A28E-bNg
The game will be launched in October 2014 for PCs and Macs, and in the first quarter of 2015 for games consoles, including Sony’s PlayStation and Microsoft’s Xbox. The game is available in 17 languages and can be purchased directly from www.NewHollandStyle.com.
NEW HOLLAND, Pa. -- October 15, 2014