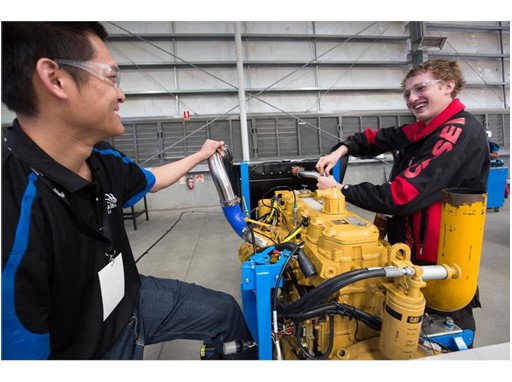 A young apprentice from Western Australia has taken out the bronze medal in Heavy Vehicle Mechanics at the 2016 WorldSkills Australia National Competition in Melbourne recently.
Cameron Lennox, a third year heavy plant mechanic apprentice at Cunninghams Ag Service in Moora, earned his spot in the National Finals after winning the state final in his category in 2015.
The WorldSkills Australia National Competition hosts over 500 of Australia’s best trainees and apprentices in a three-day competition, testing trade and skill technicians across 60 categories.
Despite working primarily on Case IH farm machinery at Cunninghams, Cameron was able to transfer the skills he learnt from his apprenticeship across to unfamiliar truck engines and successfully diagnosed all faults presented to him.
He said the competition was a challenging, but hugely beneficial experience.
“The competition was a massive eye opener, not only due to the sheer size but also the atmosphere and level of competition – all of the other competitors had specialised in truck mechanics and had already completed dual trades in mechanics and auto electrics.”
The event was the culmination of months of training for Cameron, who spent a combined total of 18 hours being tested in his ability to troubleshoot across six categories including hydraulics, electric diagnostics and engine tune up and diagnostics.
In addition to his mechanical apprenticeship, Cameron is also completing a Certificate IV and Diploma in Engineering with support from Cunninghams, and hopes to study a Bachelor of Mechanical Engineering within the next five years.
Brett Young, Cunninghams Ag Service Dealer Principal said the company was extremely proud of Cameron’s bronze medal success and the achievements he has made during his apprenticeship.
“This is a remarkable achievement for a young apprentice from the small country town of Moora. Cameron has demonstrated a real commitment to training and motivation to compete with the best in the industry.
“We congratulate Cameron on his outstanding success and believe he has an excellent career ahead of him”
“It has also been a great result for Cunningham Ag Service Manager, Tim King, to have Cameron win this award. Tim, with his dedication, has always set very high standards for his fellow mechanics” said Brett.
Cameron also acknowledged Tim King as playing an instrumental role in his training, along with the support from the whole Cunninghams Ag Service family and Case IH.
01/12/16