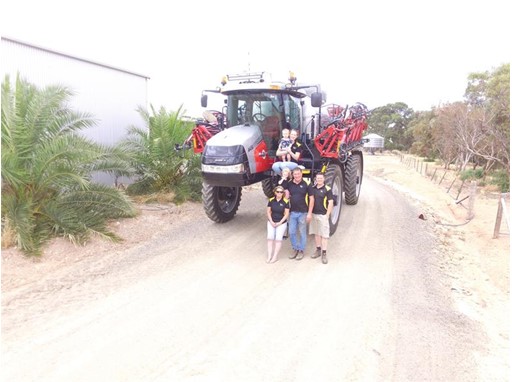 It’s been a big year in the evolution of Case IH’s Patriot sprayer – it’s celebrated its 25th anniversary, got a special paint finish to mark the occasion and now Australian farmers can experience the latest version of the technology that’s propelled the Patriot to such great heights.
The AIM Command system was a game-changer in spray technology, offering flexibility to product application, and the latest version – AIM Command FLEX – is now on the market, offering even more advantages than the previous form, the AIM Command PRO.
It offers consistent, flexible and accurate application, regardless of speed and terrain, and the likes of South Australian farmer Robin Krieg wouldn’t be without it.
Robin and wife Robyn farm with son Josh and his wife, Caitlin, at Kangaroo Flat, about 40km north of Adelaide that produces a wide variety of crop types from wheat, barley, canola and oats to chick peas, lentils, hay and faba beans, across just over 3000ha.
Their enterprise, as well as the contract spraying business they operate, relies on a Case IH Patriot, the third one the Kriegs have owned in the past seven years.
The latest Patriot arrived at Pine Plains in April, sporting the limited edition 25th anniversary paint finish and the new AIM Command FLEX S technology.
It’s already done 1000 hours and Robin, who had AIM Command Pro on the last Patriot, says the FLEX S is giving all that was promised.
“It’s an improvement on what we had last time in that the FLEX is easier to operate,” Robin said. “You can go from a fine spray to ultra-coarse with the press of a button.
“The individual nozzle control means you don’t waste any chemical and it works out to be very accurate – if you have 34 hectares to do, you’ve done 34 hectares - there’s no wastage of spray.”
Alyx Selsmeyer, Case IH high horsepower and sprayer product manager for Australia/New Zealand, said there were three levels of technology on the newest Patriot sprayer - Non- AIM Command, AIM Command FLEX and AIM Command FLEX S – with the three levels giving the customer increasing levels of spray control.
She said features of the FLEX technology included:
Robin said as a contract sprayer, and given their location, they sprayed alongside many different types of crops, from onions and potatoes, to vineyards and flowers.
“We’re got a whole range of things around us where we’ve got to be careful of spray drift. The FLEX makes it a lot easier to switch to an ultra-coarse spray and in a lot quicker time,” he said, adding that even in up to 30km/hr winds, he knew the spray “was going on the ground”.
Victorian farmer Ryan Nalder says the ability to spray in conditions that would ground other sprayers was one of the big advantages of the FLEX, saving precious time and money.
“Most farmers recognise the ideal spraying window can be quite small at times but with the ability to control your speed and droplet size at the touch of a button, we can extend that window,” Ryan said.
“When we get into drift-sensitive environments, for example near fencelines, we can switch to a coarser droplet size, which allows us to spray with confidence in conditions where we probably wouldn’t have have been so confident with a standard spraying system.”
Ryan’s family – parents Geoff and Kerry and brother Ben and his wife Madeleine - farm in the Mallee region of Victoria at Meatian, just south-west of Swan Hill and have just finished the annual canola harvest, with hopes of having wheat, barley and peas off before Christmas.
They took delivery of their second Patriot at the start of the season after making the switch several years ago from another make of self-propelled sprayer. The AIM Command feature was one of the attractions, and the FLEX on their latest Patriot is another step up.
“We like the turn compensation on the FLEX - being able to adjust the volume applied over the boom throughout a turn … ticks quite a few boxes,” Ryan said.
“We also like to keep our paddocks clean from weeds and those kinds of things over summer to conserve moisture for the upcoming year, so we’re often spraying out there in very dusty conditions, and the ability with the FLEX to put out a higher rate through selected nozzles - usually in wheel tracks where it’s that bit dustier - that helps with the spraying window and the quality of the spray.”
Ryan said the 36 seperate boom sections that can be controlled individually - was a real bonus, reducing the amount of overlap and the amount of spray applied, which in turn helped save on chemical expenditure.
The FLEX system also monitors each nozzle and notifies the operator immediately if a valve stops working or a wire becomes unplugged. In addition to alerts on the in-cab display, each solenoid valve has an LED indicator light to help spot problem nozzles quickly and easily.
Robin believes the Patriot is the best sprayer on the market – “I’ve done things with a Patriot that would put other things out for days and I haven’t had to stop” – and that the option of the AIM Command FLEX completes the package.
“The coverage is good – it’s probably one of the best I’ve seen for fungicide coverage - and the accuracy and evenness is excellent. It certainly makes things easier for us.”
30/11/2017