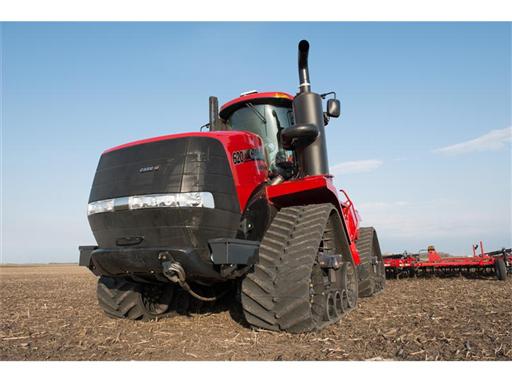 Case IH’s stand at LAMMA 2014 will feature the world’s most powerful tractor in series production, the 692hp Quadtrac 620, together with the world’s largest combine header, the brand new 12.5m 3050 VariCut, which was developed to match Controlled Traffic Farming (CTF) systems.

The most powerful model in the 2014 Quadtrac range, which also includes the Quadtrac 540 and Quadtrac 580, the Quadtrac 620 is rated at 628hp but produces a maximum of 692hp and generates up to 2941Nm of torque. The Quadtrac 620 was recently named ‘Machine of the Year 2014’ in the XXL category at the Agritechnica exhibition in Hannover.

All Quadtracs are powered by six-cylinder, 12.9-litre FPT Industrial Cursor 13 engines which incorporate the latest engine technology that significantly enhances performance and minimises fuel consumption. They are amongst the first Case IH products to be equipped with Selective

The new engines with the unique HI-eSCR technology deliver optimised combustion, thus ensuring that the Case IH Quadtrac continues to stay in the lead with regard to fuel efficiency. The patented technology not only provides outstanding cost-effectiveness but also NOx transformation efficiency of 95 per cent, setting the standard in the industry. The engines are aligned to deliver maximum performance without increasing emissions or reducing effectiveness. Larger 1900-litre fuel and 320-litre AdBlue tanks allow long, uninterrupted working days to maximise productivity.

Power is transmitted through a 16 x 2 Full Powershift transmission and the standard Automatic Productivity Management (APM) system automatically selects the best combination of gear and engine speed for each implement and type of terrain. Four independently-driven tracks provide a constant contact area of more than 5.6m², 25% greater than other tractors in this class, which increases traction, reduces ground pressure, virtually eliminates slip and minimises soil damage.

The Surveyor™ cab, the largest in the industry, provides unrivalled all-round visibility and features an exclusive suspension system which optimises driving comfort. The latest generation of Multicontroller features several detail improvements, its new design making it easier to operate while backlit controls enhance safety when working at night. Standard equipment includes high-intensity-discharge (HID) lighting which is up to six times brighter than conventional systems and provides 360° illumination.

The new 12.5m Case IH 3050 VariCut header follows the trend towards ever-larger working widths, makes optimum use of the high threshing capacities of the latest Axial-Flow combines and is ideally suited to the 12m Controlled Traffic Farming systems which are becoming increasingly popular on larger farms throughout Europe.

Featuring several new developments and innovative techologies, the header incorporates a rugged frame, double-floor design and one-piece reel. The patented reel protection system avoids contact between the reel and knife, particularly during knife extension or retraction, while the angle of the reel tines can be adjusted without tools. Case IH engineers have also improved the Field Tracker system, which uses four sensors to enhance the header’s ability when working on hillsides and uneven terrain.

The new VariCut features are designed to ensure that the engine, threshing and cleaning systems operate at full capacity and efficiency, paving the way for fewer passes, reduced turnaround time and – in conjunction with the track systems available for the front axles of Case IH Axial-Flow combines – markedly lower soil pressure and improved sustainability.