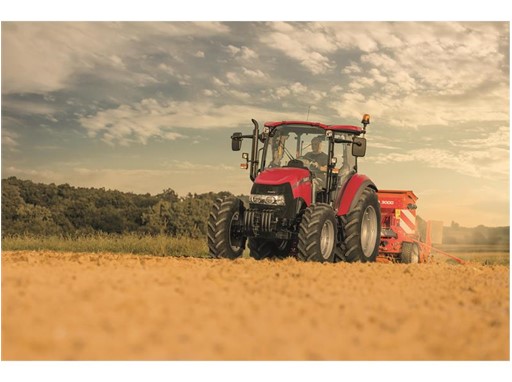 Top-end 86-114hp models revised for 2017 / Multicontroller option for improved operator comfort / New constant engine speed function / True 40kph top speed at reduced engine rpm / Increased lift capacity option / Tractors can be specified loader-ready from the factory
The Farmall C 85/95/105/115, the heart of the Case IH line of Farmall mid-hp multi-purpose tractors, is to benefit from a number of upgrades for next year, with new features aimed at making the well-established range even easier to operate, and even more capable in the field and around the yard.
Multicontroller concept comes to Farmall C
On models fitted with front linkage and the top-specification 24/24 hi/lo transmission with electro-hydraulic power-shuttle, a variation of the Multicontroller concept fitted to larger Case IH tractors is now optional, for fingertip control of key functions. The right-hand console-mounted gear lever that selects the four main gears also incorporates a series of logically laid-out buttons to ease operation of other tasks. These consist of forward/reverse shuttle, two-speed powershift selection, powerclutch button and linkage raise/lower operation. On tractors fitted with a front linkage, a further button on the lever’s rear allows operation of the linkage buttons to be diverted between front and rear linkages.
Rear linkage lift capacity boosted
With farmers demanding the ability to lift increasingly heavier implements, a second assister ram for the rear linkage is now optional, raising lift capacity by 19% from 3,700kg at the ball ends to 4,400kg.
Improved on-road performance
Farmall C tractors were previously able to reach a top travel speed of 40km/h at 2,300 engine rpm. Engine/transmission development on the latest generation machines means this is now possible at an ‘economy’ level of just 2,000rpm, cutting fuel consumption, engine wear and in-cab noise levels.
New constant engine speed memory feature
A new optional feature enables setting and storage of two engine speeds. A lower setting can be used, for example, to slow the tractor for headland turns, before switching to a higher setting once the turn is completed and the tractor and implement are back into work, making operation easier and more efficient. Engine software maintains the desired rpm regardless of load, and the speed can be fine-tuned in increments of 100rpm. Setting is via buttons on the console to the driver’s right.
New PTO options
To meet demand for higher fuel efficiency from PTO jobs not requiring high torque, economy PTO options are extended on the latest Farmall C tractors. Where formerly it was possible to order 540/540E, 540/1000 or 540E/1000rpm options, 540/540E/1,000rpm capability can now be specified.
Ready with everything required for loader installation
Case IH Farmall C tractors can now be ordered loader-ready, incorporating a subframe, hydraulic connections and joystick. This means they arrive at dealers/customers with the minimum amount of work necessary to install a Case IH LRZ premium or LRA economy loader, or one of another make.
St. Valentin/Bologna, 9 November 2016