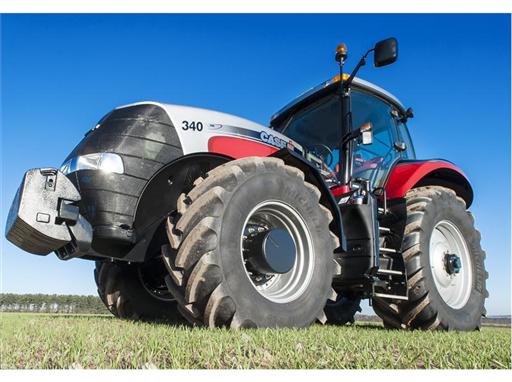 Large crowds are expected at a special charity auction being organised by CASE IH on the first day of CEREALS 2013, where former England Rugby Union Team Captain Phil Vickery will be the star attraction.

Farmer’s son Phil, a former Captain of the England Rugby Union Team, will present the successful bidder with the keys to a unique Silver Edition Magnum 340 when this special tractor goes under the hammer on the CASE IH stand (Number 7-M-700) at 14.00 on Wednesday 12th June. Well-known auctioneer Bill King, Director of Cambridge-based firm Cheffins, will wield the gavel, with profits from the sale being donated to The Prince’s Countryside Fund’s emergency relief fund, of which Phil is an ambassador and which supports farming and rural crisis charities.

Based on the 374hp Magnum 340, flagship of the Magnum range, this special tractor has been produced by Case IH to mark 25 years of Magnum production at its factory in Racine, Wisconsin. Since the original Magnum was produced there in 1988 this highly-respected model has been at the forefront of highhorsepower tractor design and continues to set industry standards in terms of its technical innovation, power and performance.
Potential bidders for the Silver Magnum have three options. Take part in person at the live auction, submit a Commission Bid with Cheffins in advance, or register with www.i-bidder.com to place an electronic bid prior to the event or during the live auction.

Charles Blessley, UK Marketing Manager for Case IH, stated: “We are delighted that Phil Vickery has agreed to assist us to raise money for such a worthy cause and recognise a landmark in the history of a tractor which has made such a valuable contribution to UK agriculture. Bill King adds: “This un-registered, UK-specification Silver Magnum will appeal to a wide range of potential bidders, from farmers looking for a powerful working tractor to add to their fleet to collectors who will want to preserve its factory-original condition. The tractor will be presented with a certificate of authenticity to confirm its provenance and buyers will receive a framed photograph of them receiving the keys from Phil Vickery.”

Further details about the Silver Magnum and the auction are available at bit.ly/Magnum-auction​

Cheffins are Europe's leading agricultural and machinery auctioneers, conducting the Cambridge and Bristol Machinery Sales, together with on-site auction sales throughout the UK. Further details at www.cheffins.co.uk

Cornishman Phil Vickery left school at the age of 16 to work as a herdsman on his parent’s farm and started his sporting career with the Cornish club Bude before quickly moved up the ranks of Rugby Union,
subsequently Captaining England at the 2007 World Cup and a British & Irish Lions tour to South Africa. Since hanging up his boots in 2010 he has diversified into leisurewear, his ‘Raging Bull’ clothing brand now being stocked by a number of major UK retailers.