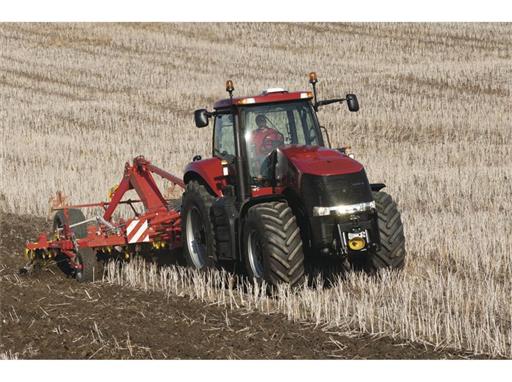 A host of new Case IH products will be making their first appearance at LAMMA in 2014. They include the latest Farmall U Pro with cab suspension and improved control ergonomics, the new Farmlift series of telescopic loaders, Magnum CVX and Maxxum CVX tractors featuring the company’s Constantly Variable Transmission, together with the RB455 and RB465 round balers.

Available from January 2014, the latest version of the Farmall U Pro offers an improved, premium-specification cab. At just 72db (A), it is the quietest in its sector with new highly ergonomic controls, air conditioning, and best-in-class visibility. A new cab suspension system is available as an option.

Designed, developed and manufactured at Case IH’s St. Valentin factory in Austria, alongside Maxxum and Puma models, the four-wheel-drive 99hp 95U Pro, 107hp 105U Pro and 115hp 115U Pro offer outstanding versatility, performance, economy and comfort. All feature four-cylinder, 3.4-litre FPT common-rail, Efficient Power engines which deliver more power and torque from less diesel. These turbocharged/intercooled Stage IIIB (Tier 4i) power units are rated at 2,200rpm but generate Constant Power down to 1,900rpm.

Power is transmitted through a 32 x 32 Eco Powershift which incorporates a true Powershuttle facility. Developed, designed and produced by ZF exclusively for Case IH, it features direct-line power transfer for optimum efficiency and performance, plus an Eco facility which allows 40kph travel at 1730erpm.

The new Case IH Farmlift range of telescopic loaders combine compact dimensions, powerful engines and hydraulics, and multi-functional capabilities. The series comprises six models, from the agile Farmlift 525, designed especially for use in low buildings and livestock housing, to the powerful Farmlift 935, which handles high and heavy lifting work with ease. Power outputs span 74hp (Farmlift 525) to 143hp (Farmlift 635 and 742), and maximum lift heights range from 5.7 to 9.6 metres.

All Farmlift models are equipped with comfortable, spacious, fully-glazed accommodation offering optimum visibility. All essential functions, such as boom operation, directional of travel and gear changing, are placed at the driver’s fingertips via the machine’s joystick.

As standard, Case IH Farmlifts have a hydraulic flow capacity of up to 120 l/min, while models 635 and 742 feature a variable displacement pump with a capacity of 140 l/min. All are equipped with four-wheel drive, while three different steering modes can be selected for excellent manoeuvrability and a tight turning circle.

Case IH, which has more than a decade’s experience of Continuously Variable Transmission (CVT) technology, will be showing its new six-cylinder Magnum CVX and four-cylinder Maxxum CVX for the first time at LAMMA, alongside the well-established Puma CVX.

Maxxum CVX EP is the first four-cylinder Case IH tractor to incorporate CVT. Versatile and cost-effective, the Maxxum 110 CVX EP, Maxxum 120 CVX EP and Maxxum 130 CVX EP are rated at 110, 121 and 131Hp(cv), but all feature ‘Power Management’ which provides up to 32Hp more in transport, hydraulic and PTO applications.

In addition to eight Puma CVX models, ranging from the 131hp 130 CVX which delivers a maximum of 171hp with Power Management, to the 228hp Puma 230 CVX with up to 269hp, Case IH now offers Continuously Variable Transmission on six Magnum CVX models from 260hp to 370hp.

The most powerful Case IH rigid-chassis tractor, the 404 hp Magnum 370 CVX incorporates a four-range CVT which enables the tractor to move seamlessly from a standstill to its maximum speed, while the ‘Active Stop’ function provides additional control and enables hillside stops without applying the brakes.

Setting new standards in design and performance, the RB455 and RB465 produced up to 20% higher capacity and 14% denser balers compared with competitor machines during rigorous field testing.