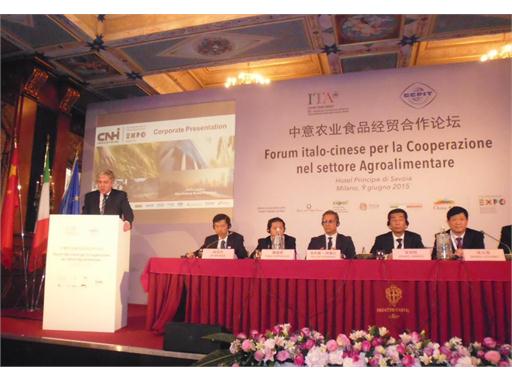 Members from the Company’s senior management team joined the heads of Chinese and Italian Agriculture Ministries and national Trade Agencies to discuss topics related to the agriculture and food industries.

CNH Industrial N.V. (NYSE: CNHI / MI: CNHI) was represented by several members of its senior management team at the China - Italy Agrifood Cooperation Forum held on June 9 in Milan, Italy. The event was organised by the China Council for the Promotion of International Trade (CCPIT) and the Italian Trade Agency (ICE) in concurrence with Expo Milano 2015, the universal event being held in the city until the end of October 2015.

The Forum saw the attendance of high ranking officials from China and Italy including Mr. Wang Yang, Vice Prime Minister of the People's Republic of China, Mr. Han Changfu, Minister of Agriculture and Mr. Maurizio Martina, Italy’s Minister of Agricultural, Food and Forestry Policies. The event served as an opportunity to examine the existing and potential synergies between China and Italy in the agriculture and food industries, playing directly into Expo’s theme “Feeding the Planet, Energy for Life”: a call to action for global stakeholders to work towards providing the world’s population with adequate and sustainably-produced food.

As a Global Partner of Expo and a major industrial player in China, CNH Industrial took part in the day of discussion panels and interacted with other representatives from institutional, trade and corporate bodies.

“CNH Industrial has long-established ties with China where our agricultural machinery brands count a presence of over 100 years. Since then we have continued to develop and consolidate our industrial and commercial relations in all areas. It was important for us to take part in an event such as this that promotes collaboration in the agrifood sector between China and Italy. The Chinese market is in the pursuit of agricultural machinery of the highest quality and requires the support of agricultural mechanisation to ensure food security for the country,” commented Stefano Pampalone, Chief Operating Officer for the Asia Pacific region at CNH Industrial.

Mr. Pampalone attended the forum together with Carlo Lambro, Brand President of New Holland Agriculture – a CNH Industrial agricultural machinery brand, who delivered a presentation during the forum session entitled The Bright Future of China and Italy’s Agriculture and Food Cooperation under the Framework of the Silk Road Economic Belt. Mr. Lambro discussed the role of CNH Industrial in China, recalling his own past experience in the market where he held important management positions from 2004 to 2006: “Agriculture has always played a key role in China and with our machines we can help to improve and simplify the lives of farmers, increase productivity and provide support for implementing the correct use of resources in order to produce food for all in a fair and sustainable manner.”

CNH Industrial currently operates nine assembly and manufacturing facilities in China, three of which are dedicated to agricultural machinery. The Company’s overall activities account for more than 13,000 employees, including three joint-ventures. In 2014 the Company inaugurated a new agricultural equipment manufacturing complex and Research & Development centre in Harbin, the largest of their kind in Northeast China. The facility produces a wide range of product lines: planters, tractors, combine harvesters with their headers, balers and hay tools. This equipment is designed to mechanise the full cycle of corn, wheat, soybean and hay production.