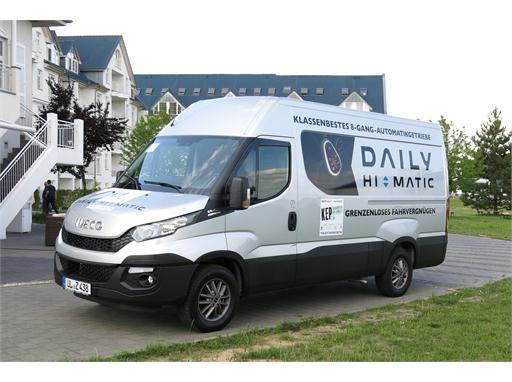 A jury of 25 experts from Germany’s express courier and parcel delivery sector have named the Iveco Daily as “Best KEP Transporter 2015”. The win is the result of back-to-back comparison driving tests conducted with a series of competing vehicles. The new Daily Hi-Matic automatic gearbox also received the “Innovation Award” from the judges. This latest accolade follows the vehicle being named “Van of the Year 2015” by a panel of international trade journalists.

CNH Industrial N.V. (NYSE: CNHI / MI: CNHI) announces that the Daily, the light duty commercial vehicle from its brand Iveco, has been awarded as the “Best KEP Transporter 2015" in Germany. The award was conferred by ETM, a German publishing house based in Stuttgart, which brought together 25 professionals from the express courier and postal sector to judge the best vehicles dedicated to their industry.

Judges put a Daily 35S13 model through its paces as part of a multi-vehicle appraisal. They then went on to name the Daily as their “Best KEP Transporter 2015”. Iveco’s advanced eight-speed Hi-Matic automatic transmission was further awarded with the highly sought after “Innovation Award”. The Daily was recognised for combining the most accessible loading space on the market with a generously dimensioned cab and new levels of driver comfort. This comfort is delivered thanks to a comprehensively restyled interior for the latest generation model, which brings the cosiness of a premium automobile to that of a light commercial vehicle.

Also advancing the Daily’s success was the new Hi-Matic gearbox, which offers drivers and fleets with best-in-class flexibility, efficiency, fuel economy and driving comfort. Developed with ZF Friedrichshafen, the Hi-Matic is the first eight-speed automatic transmission to be offered in a vehicle range in this class. It can change gears faster and more precisely than even the best of drivers, requiring less than 200 milliseconds for a gear shift. The judges commented that the Hi-Matic transmission was outstanding.

This is a further success on German soil for the Daily, which won the prestigious international “Van of the Year 2015” title at the 2014 IAA Motor Show in Hannover.