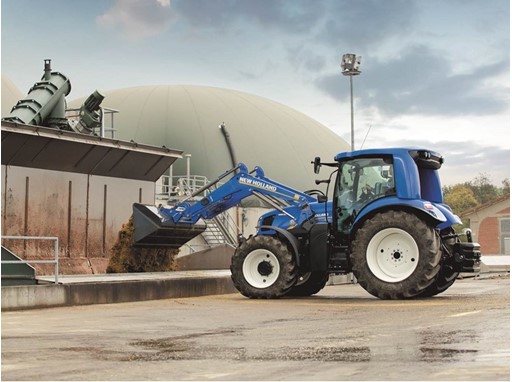 The development of New Holland’s innovative 100% methane powered tractor is making progress and the second generation T6.180 Methane Power tractor prototype has completed extensive testing across Europe, proving its worth in a wide variety of conditions, while the first generation T6.140 has begun a new testing cycle in Brazil.
As it celebrates the 100th years of its first mass-produced tractor, New Holland is making significant progress with the testing and development of its innovative T6 Methane Power tractor and is exhibiting the latest prototype on its stand at the SIMA 2017 show.
The second generation prototype has been extensively tested by customers in Italy, Spain,  the UK, Germany, Denmark and the Netherlands. Among those who experienced the operational potential and environmental qualities of the T6.180 Methane Power tractor were also three young farmers from Spain, Portugal and Bulgaria, who were awarded earlier this year for their innovative and sustainable projects at the Third European Congress for Young Farmers sponsored by New Holland.
The first generation T6.140 Methane Power tractor prototype is involved in a joint project between New Holland and Itaipu Binacional, the world’s leading producer of clean and renewable energy. The prototype is touring farms and agricultural cooperatives in the West Paraná region in Brazil, where it is field tested to collect data on the viability of bio-methane as a fuel for agricultural equipment. The project also includes a series of activities aimed at promoting the development of a supply chain for biogas generated from urban and agricultural organic waste.
The T6 Methane Power tractor is also playing an important role in raising awareness of the opportunities of alternative fuels for a sustainable agriculture, by making public appearances at a variety of events. For example, the first generation T6.140 was on display at one of the most important agricultural shows in Latin America, Expointer 2016, which was held last September in Porto Alegre, Brazil. The second generation T6.180 Methane Power was exhibited at the OECD (Organisation for Economic Co-operation and Development) headquarters in Paris for the Annual Tractor Meeting of experts, manufacturers and government officials.
The T6.180 Methane Power on display at the SIMA show is fitted with a NEF6 engine produced by FPT Industrial and its configuration is very similar to that of currently manufactured diesel tractors. The compressed methane is stored in 9 tanks that are integrated into the overall design, with operational ground clearance as per standard models. The 52-kilo tank capacity delivers approximately half a day of autonomy during normal operation. The Methane Power tractor yields fuel cost savings up to 25% compared with diesel or agricultural diesel machines and has 80% lower polluting emissions than a standard Diesel tractor. It is already capable of fulfilling future greenhouse gas targets, which are expected to require a 20% reduction across Europe by 2020. CO2 emissions reductions and up to 40% fuel cost savings can be further achieved by using biomethane produced on the farm itself.
“The T6 Methane Power tractor is one of the cornerstones of our Clean Energy Leader strategy, which we launched ten years ago to increase farming efficiency and sustainability,” said Carlo Lambro, Brand President. ”At New Holland we saw early on that alternative fuels are key to achieving a low carbon future for agriculture, and we have invested accordingly. Today we see methane and propane as the fuels with the greatest potential for the development of technologies that deliver on all fronts: performance, costs and sustainability.”
February 27, 2017