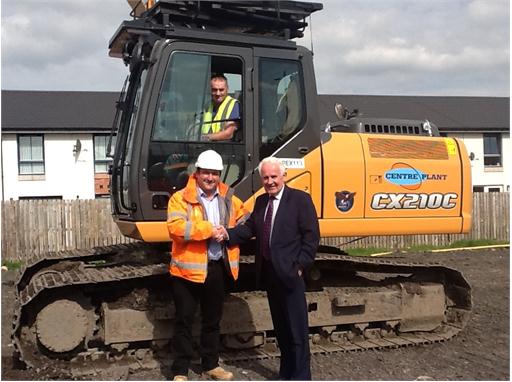 Centre Plant, a division of Glasgow based Allma Construction has further increased their fleet of Case machines after taking delivery of the first part of an order for seventeen, new C series excavators.

Allma, a groundwork’s contractor working predominantly within the house building sector, have been operating Case machines exclusively for more than 10 years. They currently have in excess of 60 Case excavators working across the group, ranging in size from 1.8 tonne up to 30 tonnes, on sites throughout central and western Scotland.

This latest order is part of the company’s ongoing replacement and expansion of their existing fleet, and to accommodate a growing order book. Last year the company purchased sixteen Case machines which included three CX18B’s, two CX50B’s, and ten CX130C crawler excavators, plus a CX300C to replace a CX290, which had clocked up more 15,000 hours of service.

Like their predecessors, machines from the new Case C series range are renowned for reliability. They also deliver an impressive digging performance, together with low emissions and reduced fuel consumption. This is a result of the Tier 4i engines, which use cooled exaust gas circulation (CEGR) to provide a cleaner burn.

Peter McBride, director at Centre Plant, said. “We have been a Case customer for many years so we know the brand very well. Case machines have always proved to be very efficient, so it was an easy decision for us to approach Case when we wanted to update our fleet. We had already purchased several different models from the C series range last year, which we have been very impressed with. It’s simple, we need machines that we know are going to be reliable, perform well and deliver good fuel economy. Our previous Case machines all performed well, which is why we have continued to place orders.”

Jim Malia, strategic accounts manager for Case added “This recent order from Centre Plant reaffirms their confidence in the performance, reliability, and fuel efficiency that our C series excavators deliver. Over the past twelve months we have seen sales increasing by 50% on this range, through sales to existing and new customers. The combination of impressive digging performance, low emissions, and savings on fuel, makes our machines an extremely attractive proposition for operators working across a wide range of applications.”