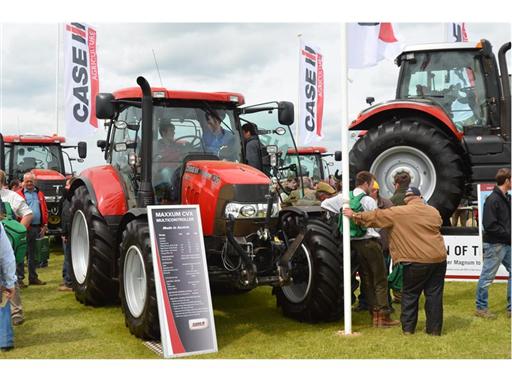 Versatile and cost-effective, the 110hp Maxxum 110 CVX EP, 121hp Maxxum 120 CVX EP and 131hp Maxxum 130 CVX EP follow an increasing trend in the agricultural industry towards the use of CVT transmissions.

Since being introduced by Case IH in 2009 they have been very successful and now feature in all of the company’s six-cylinder Puma CVX models from 131hp to 228hp.

Incorporating two mechnical gears for excellent overall efficiency, the CVT transmission provides Maxxum CVX EP models with infinitely-variable forward speeds up to 50kph, which is reached at a low engine speed of 1750rpm, with 40kph being achieved at just 1600rpm. Equipped with helical gears which ensure smooth running at all speeds, the CVT transmission’s two forward, reverse and shuttle gears are changed automatically using a double-clutch arrangement which provides a smooth, seamless transition between the gears. The clutches engage only when both gears are rotating at the same speed, providing levels of comfort and efficiency which are unachievable with any other transmission technology, whilst also extending service life and minimising power losses.

Maxxum CVX EP tractors are equipped, as standard, with Automatic Productivity Management (APM), a system which has proven very effective on larger Case IH models and automatically reduces engine speed when power demand is low in order to optimise fuel efficiency. Maxxum EP tractors also feature an active stop control system which holds the tractor safely in the stop position, even on hills, with or without a load attached and without having to operate the clutch. This feature also makes it easier to drive the tractor on low-friction surfaces, reduces wear on the brakes and clutch, whilst also increasing safety by avoiding the need to activate the parking brake.

The three new Maxxum EP tractors are powered by four-cylinder, 4.5-litre diesel engines which are turbocharged and intercooled to maximise their efficiency. Featuring precise electronic common rail injection to optimise fuel use, they provide a Power Boost function which delivers a 10% increase in power output at an engine speed of just 1900rpm to reduce fuel consumption and engine wear. They also incorporate a Selective Catalytic Reduction (SCR) which is manufactured by Case IH and improves engine power output, responsiveness, fuel economy and reliability, whilst lowering emissions.

Idle Speed Management, an innovative software function which further reduces fuel consumption and operating costs, automatically reduces the engine‘s idle speed from 850 rpm to 650 rpm 30 seconds after the driver has left the cab, when the electronic remotes or three-point linkage are not being used.

The four-pillar Surround Cab fitted to all Maxxum CVX EP models provides one of the most comfortable working environments of any tractor on the market. Largest in its class, it has large windows which incorporate 5.78m² of glass, providing exceptional visibility. An integrated roof window provides a 105° forward view and unobstructed visibility, making the tractor ideal for use with a front loader. With a sound rating of just 71dB(A), the cab is one of the quietest on the market.

To enhance their all-round versatility, Maxxum CVX EP tractors are equipped with an extremely versatile hydraulic system which incorporates an axial piston pump that delivers high flow rates of up to 125 litres per minute on-demand, with pressure and flow regulation functions. The rear hitch has a lift capacity of 7867kg, while the front hitch will handle 3100kg. Up to seven electro-hydraulic remote valves are provided, enabling a wide range of hydraulic functions to be controlled. Owners can also specify up to four rear remote hydraulic connections and three mid-mount connections.

A key feature of the new tractors is an optional front hitch management system which makes it much easier to operate front-mounted implements. The operator is able to programme two height settings, the automatic float setting allowing the front hitch to switch automatically to float mode when the working position is reached.

“Continuously Variable Transmission technology is part of the reason why CASE IH has a truly global tractor range that delivers productivity and cost effectiveness in the widest range of applications and farming businesses. The new Maxxum CVX EP models will be built at the Case IH factory in St. Valentin,

Austria and available to farmers in the UK in January 2014,” states Alun Scott, Product Marketing Specialist for Case IH UK.