CNH Industrial in pole position for the Giretto d’Italia 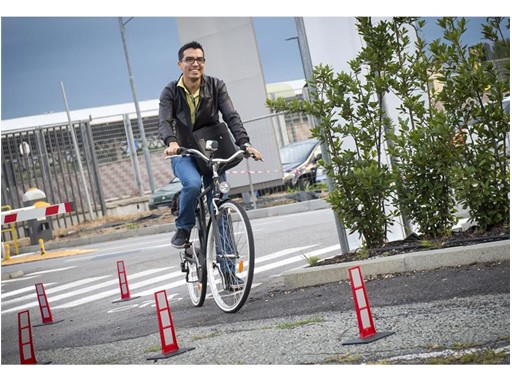 Eleven of the company's sites in Italy are participating in the sixth edition of the initiative that promotes bike mobility in the city.
For the second consecutive year, CNH Industrial has participated as a main sponsor in the “Giretto d'Italia”, which is an initiative that promotes the use of bicycles in cities, particularly when commuting between home and work.
Check points have been set up for employees at 11 Company sites in order to monitor the arrivals of those who chose to bike to work. More than 650 employees participated. The Company also awarded a number of bicycles to employees to promote participation.
The sites that participated are Bolzano and Vittorio Veneto (where civil protection equipment is produced), Brescia (medium-duty commercial vehicles), Jesi and San Matteo (agricultural tractors), Modena (components for agricultural machines), Piacenza (quarry construction vehicles), Pregnana Milanese (marine engines), San Mauro (construction machinery), Suzzara (light-weight commercial vehicles) and Turin (office sites and engine production site).
Now in its sixth year, the “Giretto d’Italia” is promoted by Legambiente and VeloLove together with Euromobility and FIAB, and is implemented within the scope of the European BikeToWork project. It is one of the initiatives of the European Mobility Week (16-22 September).
“Sustainable mobility is an investment that is useful for everyone, because its advantages have an impact on public and private spheres, on the community and on individuals. Promoting travel by bike, car-pooling and public transport, together with traditional means of transport, means improving the quality of life and the environment in our cities. These are fundamental topics for CNH Industrial, which has just been confirmed for the sixth year as a leader in the Dow Jones Sustainability Indices World and Europe,” said Daniela Ropolo, Sustainable Development Initiatives Manager for the EMEA region (Europa, Middle East and Africa) at CNH Industrial.
London, 22 September, 2016