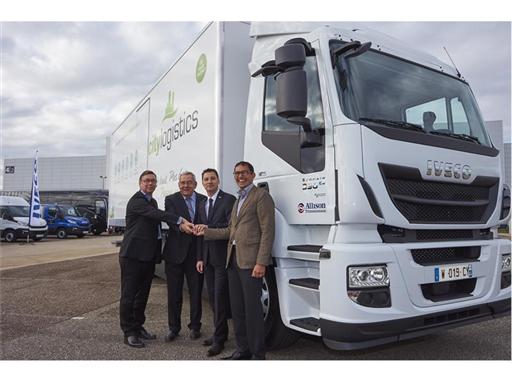 Iveco, the commercial vehicles brand of CNH Industrial N.V. (NYSE: CNHI /MI: CNHI), has delivered its 1,000th commercial vehicle to be powered by natural gas in France. The recipient of this milestone unit is French company CityLogistics, which provides urban logistics services and deliveries in the cities of Lyon and Villeurbanne, with plans to extend to other parts of the country. The company is focused on providing its services while reducing their negative impact, including pollution, traffic congestion, parking difficulties, multi-drop missions on low mileages and delivery delays.

Among its green fleet CityLogistics already counts a number of Iveco commercial vehicles powered by Compressed Natural Gas (CNG). At the recent Solutrans fair in Lyon, the company ordered a further ten Iveco Stralis Natural Power trucks from the brand’s heavy range. These vehicles are equipped with the Cursor 8 CNG engine, produced at CNH Industrial’s engine plant in Bourbon-Lancy, France.

Natural gas is a viable alternative to diesel and benefits from more advantageous and stable pricing, reducing total cost of ownership (TCO) by up to 10% when compared to Euro VI diesel vehicles. In terms of providing practical infrastructure for refuelling, CityLogistics has reached an agreement with the Spanish group Endesa for the construction and management of a new refuelling station in the city of Lyon, which is now operational, to supply natural gas and biomethane to the CityLogistics fleet of Iveco CNG trucks.

As they are 100% compatible with biomethane, a naturally occurring gas produced from organic waste, Iveco CNG-engine trucks have a neutral carbon footprint (CO2 emissions) – a significant step forward in the increasingly necessary transition to more sustainable sources of energy. All in all, these CNG engines represent the most immediate response to the various challenges of 21st century road transport – air quality, climate protection and quiet operation – without removing any of the fundamental benefits of the trucks – namely flexibility of use and low cost of ownership.