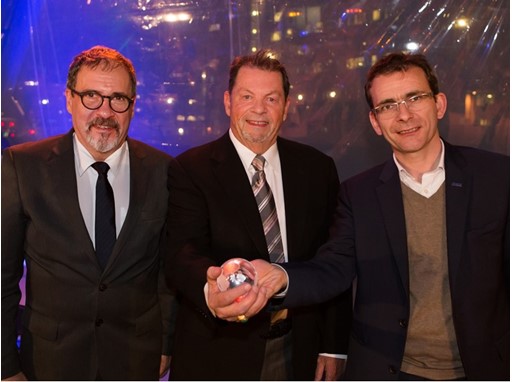 As a part of the NGV GLOBAL 2017 conference, the natural gas vehicles association held an international gathering on March 22 to present a series of sector awards. IVECO received the “NGV Global Industry Champion” award recognizing the brand’s 20 years’ of pioneering work in developing a full range of natural gas vehicles from light, medium and heavy trucks to buses.
NGV Global, the International Association for Natural Gas, has recognized IVECO, the commercial vehicles brand of CNH Industrial (NYSE: CNHI /MI: CNHI), with its “NGV Global Industry Champion” award at the NGV GLOBAL 2017 conference being held this week in Rotterdam, The Netherlands. NGV Global represents the natural gas vehicle industry worldwide and is dedicated to promoting the use of natural gas and biomethane for transport, with a view to increasing vehicle efficiency and safety in all areas.
The association’s biennial award recognizes initiatives and programs implemented by companies in order to develop and improve the natural gas sector around the world. The NGV Global board selected IVECO based on criteria that included the progress made in the use of natural gas as an alternative fuel and its contribution to developing the natural gas vehicle market worldwide. In its evaluation, the jury looked at the impact of the activities of the brand at national, regional and global levels. NGV Global represents the interests of almost 350 members throughout the world. Since its establishment in 1986, it has seen the global number of Natural Gas Vehicles (NGVs) grow from almost none to more than 23 million. Over the next few years, NGV Global is projecting a continued growth, towards a target of 65 million NGVs on the road globally by 2030.
It is the first time that NGV Global presents this Industry award during its conference and exhibition, in celebration of its 30th anniversary. In previous occasions, the “NGV Global Industry Champion” award has been conferred to people and companies that had been important to the development of the Industry in their regions. This year, the award was determined directly by the NGV Global leadership committee with the aim of recognizing the leading industries with a global presence in the Natural Gas for Transportation sector.
In presenting the award, Diego Goldin, Executive Director of NGV Global, said: “IVECO’s focus on natural gas propulsion, offering methane-powered alternatives, including biomethane, on its entire commercial vehicle product range, significantly contributes to the reduction of transport-related emissions. I hope you will accept this token not just as a mark of all that has been achieved but also as a beginning of a new chapter of greater adoption, development and prosperity for natural gas technology in the future.”
Accepting the award, Pierre Lahutte, IVECO Brand President said: "We are proud that our commitment to the development of natural gas as a fuel for sustainable transport has been recognized. At a time when many are looking for alternative fuel solutions and ways of making electric or even hydrogen propulsion technologically and economically viable, natural gas simply proves itself as an already mature, reasonable and affordable solution with important Well-to-Wheel results in terms of CO2 reduction that could become even more significant with the use of biomethane. At IVECO we have worked on the development of this sustainable fuel for over 20 years and today already some 16,000 vehicles in Europe are operating either on Natural or Biogas.”
IVECO is a global leader in natural gas commercial vehicles and the first manufacturer to offer a full range of natural gas models from light to heavy vehicles and buses. The key objective of the brand’s product strategy is to provide its customers with vehicles that enable them to be more sustainable, both for the environment and their bottom line. As a result, the brand has seen an accelerating adoption rate for natural gas in Europe and further afield from both new and existing customers.
Natural gas counters pollutant emissions whilst reducing total cost of ownership, as well as cutting noise pollution, another key factor for urban areas. In developing this alternative transport solution, IVECO has been anticipating several recommendations made in 2016 by the European Commission in its communication on a European Strategy for Low-Emission Mobility.
Thanks to the increasing availability of bioCNG (Bio - Compressed Natural Gas) and bioLNG (Bio - Liquefied Natural Gas) fuels in Europe, both logistics and public transport companies can now operate CO2 neutral fleets which contribute to energy independence and combatting climate change.
The “NGV Global Industry Champion" award is the latest addition to a series of recent national and international awards recognizing both IVECO’s technological leadership, as well as, its commitment to sustainability. The brand’s Stralis NP, the first gas-powered vehicle designed for long-distance transport, was awarded "Project of the Year 2017" at the European Gas Awards of Excellence, "Vehículo Industrial Ecologico del Año" (Ecological Industrial Vehicle of the Year) 2017 in Spain and also recognized by the UK’s Green Fleet Awards in 2016. Further to this, its Eurocargo CNG won “Sustainable Truck of the Year 2017.”
London, March 23, 2017