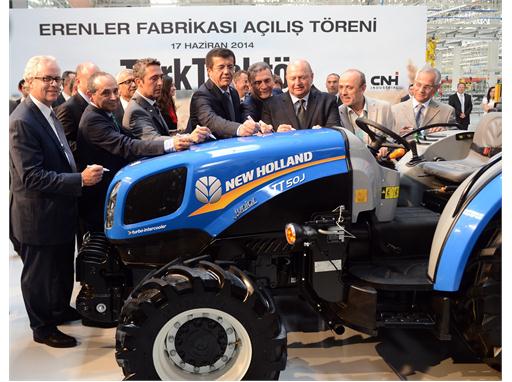 The joint venture between CNH Industrial and Koç Holding inaugurated its second manufacturing plant in Turkey, which will produce Case IH and New Holland Agriculture tractors for the local and export markets. The inauguration coincided with the 60th anniversary of TürkTraktör, the country’s leading tractor manufacturer.

TürkTraktör, the joint venture between CNH Industrial and Koç Holding, celebrated the opening of its second manufacturing plant in Erenler, in the Sakarya region. The new state-of-the-art facility, which extends over 222,000 sqm (68,000 covered), will raise the joint venture’s production capacity to 50,000 tractors per year for both domestic and export markets, allowing the company future growth.

The new plant in Erenler has been designed to integrate the latest manufacturing technologies, following the industrial processes of the World Class Manufacturing system that have been adopted in all of the 62 CNH Industrial plants across the globe. These are the best principles to reduce waste, improve safety, efficiency and quality, reducing the environmental impact of industrial operations.

At the opening ceremony, which was held at the new facility, Richard Tobin, Chief Executive Officer of CNH Industrial, and Mustafa V. Koç, Chairman of the Board of Koç Holding, spoke about the significance of this event for Turkish industry and the important role of TürkTraktör in the country’s agriculture. The event was attended by guests of honour the Minister of Science, Industry and Technology Fikri Işık and the Minister of Economy Nihat Zeybekçi, and by the national media and trade press.

At the inauguration Mr Tobin commented: “Only 15 months ago, on March 28th 2013, the groundbreaking ceremony was held here and the first foundations laid. This is a demonstration of the strong commitment from all parties to build a tractor center of excellence. Such an achievement would surely not have been possible without the dedication of everyone involved in the project.”

Mr Koç highlighted the joint venture’s role in the country’s industry: “TürkTraktör is an important manufacturer for the Turkish industry, being the first in the country’s automotive sector. By manufacturing the most important parts and accessories here, it has driven the development of a supplier industry and also created a competitive edge. We export to some 130 countries around the world. With this new investment, we will increase capacity not only for tractors, but also for Corporate Communications transmission and engine processes. We will create a very important success story within the sector, confirming our leadership.”

The Erenler plant, together with the Ankara facility, will enable TürkTraktör to exploit the potential presented by the Turkish agriculture sector, which is growing every year, and the export markets. “In 1967, here in Turkey, we established our joint venture choosing Koç Holding as our strategic partner. This was the beginning of a long and fruitful relationship,” added Mr Tobin. “This year the 700,000th tractor will come off the line, and with the Erenler plant now opened, we have the milestone of the Millionth tractor in our sights. Today, TürkTraktor combines the know-how and reach of CNH Industrial in the agricultural sector with the experience and reputation of Koç Group in the Turkish market. We are proud to continue this bold adventure with Koç Group.”