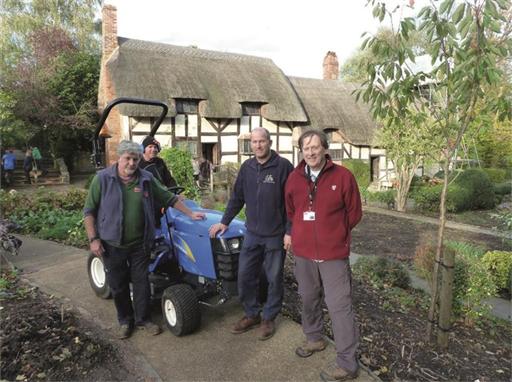 The Shakespeare Birthplace Trust’s garden team – which is behind five of the world’s most photographed gardens in the world – has taken on a compact tractor to help tend the gardens based at five Shakespeare family homes in and around Stratford-upon-Avon.

Since the introduction of a New Holland TZ24 compact tractor, time for staff at the charity, which cares for the world’s greatest Shakespeare heritage sites in Stratford, has been freed up to tend to other tasks, results are better and fuel use is more efficient.

The versatile and highly dependable machine was delivered in a deal with the Warwickshire-based Compact Tractor Centre​. It came complete with a mid-mounted mower and Lewis trailer.

With three quarters of a million international and local visitors welcomed by the charity every year, it is vital for the team of eight to have the right tools to look after the 25 acres of land in and around Stratford.

The Shakespeare family homes each offer a variety of gardens featuring orchards, herb plots and sculptures all with their own character. Among them is the famous Anne Hathaway’s Cottage & Gardens where Shakespeare came to woo his future wife.

Nick Jackson manages the gardens of the five Shakespeare family homes in and around Stratford. He explained his preference for New Holland: “The reasons we chose New Holland were the adaptability of the unit to do multi-tasks, and ease of use for the operatives, and low running costs plus the convenient location of the dealership for parts and after sales service.

“In the way of performance the machine has also demonstrated reliability and adaptability when working on our grounds department.”

Nick added: “The after-sales care from the Compact Tractor Centre has been very good and any parts are easily accessible. They collect the unit and deliver it back when the work is completed and on time.”

Nathan Walker, director at the Compact Tractor Centre, said: “We’re delighted with how we were able to meet the Shakespeare Birthplace Trust’s requirements so well. We spent some time with Nick and got what he wanted.”

New Holland Sales Area Manager, Nigel Fawdry, added: “This deal goes to show what a difference even a small piece of kit can make if it’s right for the customer and has the quality and after-sales care that comes as standard with New Holland.”

The Shakespeare Birthplace Trust​​ is the independent charity that cares for the world’s greatest Shakespeare heritage sites in Stratford-upon-Avon, and promotes the enjoyment and understanding of Shakespeare’s works, life and times all over the world. The charity runs formal and informal educational programmes for people of all ages. It holds the world’s largest Shakespeare-related museum and archives open free to the public, a collection which is designated as being of international importance. The Shakespeare Birthplace Trust receives no public subsidy or direct government funding; it depends on income generated through the support of visitors, donors, volunteers and Friends.