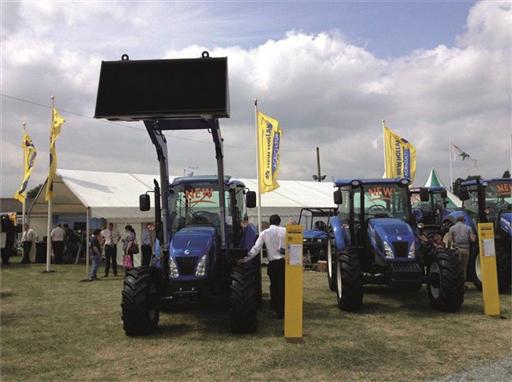 The adaptability and reliability enjoyed by New Holland’s wide range of state-of-the-art machines was highlighted in a recent pair of deals in Wales.

The machines’ reliability and flexibility will play a key role in helping to make a success of 2013’s Royal Welsh Show when it gets under way from July 22nd-25th at the showground at Llanelwedd, Builth Wells.

The agricultural event is one of the biggest and best-attended of its kind in Europe. Last year a record 240,000-plus visitors passed through the gates to enjoy its mix of displays, events and competitions.

Royal Welsh Showground site foreman Tony Smith said: “We chose New Holland because we have had them before and we are used to the tractors and their reliability. We wanted a bigger tractor with more horsepower for a flail mower – we’re up to over 100hp now with the T5.105.

“We also went for the smaller T1570 sit-on mower which we needed as a replacement.”

The four-wheel drive T5.105 is engineered for versatility, with a full range of PTO speeds, high visibility VisionView™ cab, and front and rear linkage. It is suited to take on a range of jobs with ease including transport, PTO and linkage work and is becoming a regular choice to support municipal and groundcare applications.

Powered by Common Rail engines that fully comply with the stringent Tier 4A emission regulations, the T5 range benefits from a power-to-weight ratio of a mere 37.3kg/hp for outstanding performance and impressive fuel economy.

The T1570 is a popular compact tractor mixing simple, proven design with modern dependability and low running costs, making it powerfully adaptable for tough jobs whether in landscaping, horticulture or agriculture.

Offered with a choice of mechanical or hydrostatic transmissions, each model can be prepared for specific demands. With hydrostatic drive, turf tyres and a mowing deck, they are ideal for grounds maintenance, sports and amenity work.

Another recent deal was with a farm in Gower which retained the blue brand to replace three 7740s with three T5.105s.

Run by owner Tom Beynon, it is a working family farm which grows vegetables and runs a pick-your-own operation as well as a camp site.

The new trio of blue tractors have been fitted with narrow tyres and it is their adaptability that makes them perfect for the farm’s wide range of agricultural and maintenance tasks – in the field, on the road or around the camp site.

“We used to run Ford/New Holland, so we chose the T5.105s because the weight to power ratio was right for us,” said Mr Beynon. “They’re very versatile, they do everything you want them to do, they’re economical, and they keep a good resale value.”

“T. Alun Jones & Son have a professional and good reputation and they have been very good to us with a reliable team of people who will sort out issues very quickly – a key factor making this kind of investment.”

Eirian Isaac added: “It’s great that two customers with very different operations have been able to find the perfect choice for their needs with New Holland. It shows the flexibility and trust the brand enjoys.”

The team at T. Alun Jones & Son are experts in agricultural machinery with a reputation for excellent customer service. Ideally located in the heart of south Wales they offer a comprehensive range of products and services.