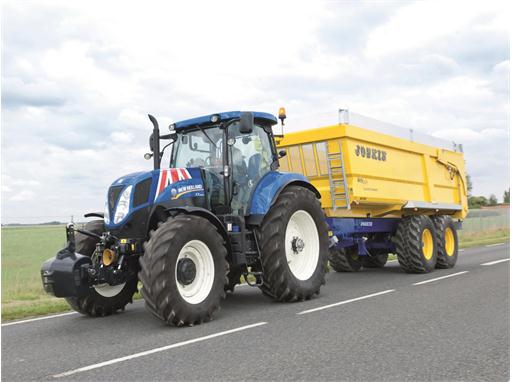 The motoring show, which has a worldwide following, dedicated its programme on Sunday August 4th to honouring top quality vehicles constructed in the UK – including a trio of New Holland state-of-the-art machines.

The British-made tractors were among a collection dramatically assembled in The Mall for filming with ‘Top Gear’ presenters Jeremy Clarkson, Richard Hammond and James May.

The filming on June 23rd 2013 demanded an early start as it lasted from 5am until midday. The New Holland machines were transported through the night on a low-loader fresh from the Basildon plant.

On hand from New Holland were Group Leader Andy Belcher and Vehicle Tester Lloyd Sanders. They were sworn to secrecy to avoid spoiling the surprise for the show’s millions of viewers.

Andy Belcher said: “It was a fantastic experience driving our British-built New Holland tractors past Buckingham Palace into the heart of London so early in the morning.

“We work hard to produce every single tractor and the whole team has such dedication to quality. All that effort made it a really proud and rewarding moment to see them lined up along the Mall. I won’t forget it!”

New Holland’s Basildon factory is home to the class-leading T6 and T7 tractors. It employs 1,000 staff, covers 40 hectares, and uses 600 tonnes of material daily on its two-kilometre production line.

Its highly-skilled engineers have produced over 1.8 million machines since production started in 1964, for the local market but also for exports to over 120 countries worldwide.

The factory is an example of high quality British manufacturing: in 2012 it was named the overall winner at the Manufacturer of the Year Awards when it also picked up the World Class Manufacturing title.

In the first five months of 2013 alone, nearly 2,000 customers, dealers, journalists and students have already toured the cutting-edge facility – including the Customer Centre opened in 2011 and the impressive Showroom, only recently inaugurated to display New Holland’s entire range under one roof.

New Holland business director Andrew Watson said: “We were honoured to be asked to contribute our tractors from Basildon to Top Gear’s show. It was a wonderful moment seeing them proudly displayed in front of Buckingham Palace.

“The programme was a brilliant opportunity to showcase to the UK and the world the pedigree of our British-built tractors. It demonstrates how this country and its workers still deliver great goods.”