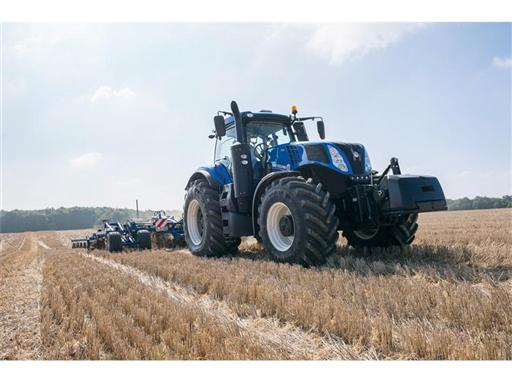 New Holland is bringing several of its most powerful machines to Tillage-Live 2015 on 16th September 2015, including the T8 SmartTrax which will soon be released into the UK market.

Other New Holland tractors which will be demonstrated at the event include the newly launched T8 series with Tier4B engine, the T7.270 long wheel base and a model from the T7 standard wheel base range.

The new T8 Tier4B series is currently the most powerful conventional tractor range in the New Holland stable, with five models offering between 235 and 380 rated hp (320 to 435 max hp with EPM when needed). The new T8 range provides comfort and maximum versatility for the end user, as well as lower operating costs than its predecessors.

The New Holland demo area, within the Precision Farming plot, will feature working demonstrations of the pulling power of its tractor ranges with a variety of Väderstad cultivation equipment. A number of New Holland tractors will also be used on the separate Väderstad plot during Tillage-Live 2015.

Jason Toogood, New Holland’s tractor product specialist, says: “Tillage-Live provides a great opportunity to showcase our most powerful machines undertaking a range of challenging operations including ploughing and cultivation. The live demonstrations will put the power and endurance of New Holland’s tractors through tests that will separate the men from the boys!”

New Holland will also demonstrate its full range of Precision Land Management (PLM) technology and solutions at the event, plus a small workshop on using unmanned aerial vehicles (UAVs) to map farmland.

The workshop aims to demonstrate the simplicity of using the Unmanned Aerial Vehicle (UAV) software supplied by New Holland’s preferred UAV supplier. This processes the crop sensing data captured from the UAV into actionable data that can help inform practical decision-making on the farm.

Tillage-Live 2015 is being held at Croft Farms in Croft-on-Tees, North Yorkshire on 16th September. The event provides large scale arable farmers with a unique opportunity to see powerful farm machinery undertaking a range of work including ploughing, cultivating, seedbed preparation and drilling.