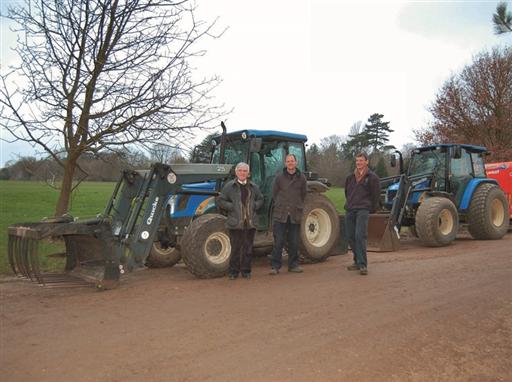 Walter Sawyer has been the Superintendent in charge of keeping Oxford University Parks in pristine condition for 23 years. Throughout this time, Mr Sawyer has stayed loyal to his successful partnership with New Holland, using a fleet of New Holland tractors to manage 210 separate spaces around the city, half of which is a contracting operation.

Among the long list of tasks, that extend beyond the famous city centre grounds, is cutting up to 150 acres of grass a week, thanks to eight New Holland tractors ranging from the smallest, a TC24D, to the biggest, a TL100A.

Mr Sawyer said: “Other sales reps for different manufacturers have tried to lure us away from New Holland. But New Holland provide reliable machines which are well thought through in design, and because of compatibility and service operations we have stayed with them.”

“I was appointed 23 years ago and it’s a completely different job now,” explained Mr Sawyer. “At the start it was only about looking after parks and 60 places with a team of 12, but the scale of the operation has grown and we now have a team of 32 people.”

He said: “We have built up a strong working relationship with the Turney Group, they know about our operations and how we tick.”

The reliability of New Holland has helped make the operation’s contracting work a success, ranging from basic maintenance to landscaping, which has developed into a business with a turnover the same size as the annual grant from the university.

“My recommendation to other people is that New Holland tractors are well built, well designed, reliable equipment,” said Mr Sawyer. “We keep our tractors for in the region of 10 years and that gives an indication of the durability.”

Turney Group’s Area Sales Manager Mike Leach said: “The Oxford University Parks are one of the most glorious features of the city that are deservedly famous around the world. We’re proud to play our part in providing the right equipment that can be trusted to do the job properly.

“It shows the success that can be achieved when a customer’s expertise is backed up with our advice, support and reliable service.”