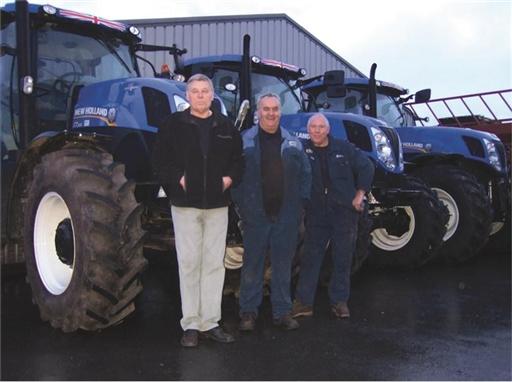 A New Holland dealership will be celebrating a rare triple anniversary in 2014 as three of its employees simultaneously mark five decades with the company.

To add to the significance of the landmark year for the team at Ravenhill Ltd’s branch in Hereford, it will also coincide with New Holland’s flagship tractor factory in Basildon reaching its own 50-year jubilee.

Sharing 150 years between them are workshop foreman Colin Jones, workshop technician Mostyn Rutter, and parts and storeman Adrian Stewart. They are all 65 years old and joined Ravenhill straight from school aged 15.

For example, Mostyn, who lives near Tenby, in Pembrokshire, started off on an hourly wage of £1.03 and as a teenager would cycle an 18-mile round-trip to get to work.

“I enjoy the camaraderie of the workforce, it’s like a happy family,” he said. “I’m an outdoors person so I’ve enjoyed meeting people, going out and about around the countryside to help customers, and not being stuck in an office.

“My advice to people starting out is never turn down a training course, keep learning, and if you’re not sure – ask.”

Their careers have seen huge changes in agriculture, including farmers increasingly trained at college and able to tackle the simple jobs that in the past would have required a call-out.

“As time has moved on so has the technology and I have managed to keep up because of the training through New Holland,” continued Mostyn. “It’s a sharp learning curve now and you have got to keep up to speed.

“Everything could be fixed with a few tools but today most of the problems are fixed with a laptop and you don’t need the spanners quite so much. Parts were very heavy but now are much lighter so you can fix things by the roadside.”

Ravenhill Ltd covers a wide area, servicing customers from seven branches shared between the north-east of Scotland and the west Midlands. It has changed hands over the years, but Colin, Mostyn and Adrian remained true.

“My wife asked if I was a stuck in the mud for staying here so long,” said Mostyn. “But I could not stop here if I didn’t enjoy it.”

Stephen Mitchell, the manager at Ravenhill’s Hereford branch, added: “All three have been so loyal – to the company and the products. They are great guys and they still want to carry on working.

“It also shows how everyone at New Holland is dedicated to keeping up with the newest technology so we can continue our oldest tradition of giving the customer the very best service.”