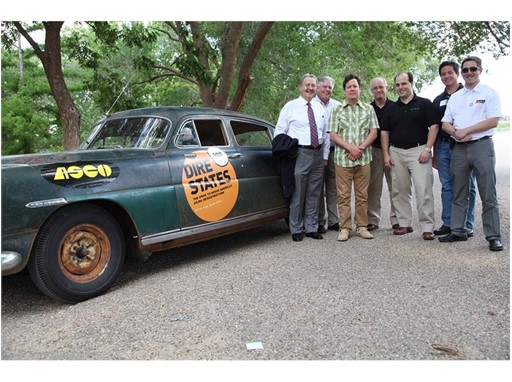 CASE’s Dire States Tour will travel the state Sept. 22-24 to help raise awareness of the initiative and the need for infrastructure investment; Ballot initiative would pump an estimated $1.7 billion annually into the Texas State Highway Fund.
CASE Construction Equipment​ has partnered with the Texas Good Roads and Transportation Association and ASCO Equipment​ to bring its Dire States​ initiative to Texas in support of Proposition 1 (the Texas Transportation Funding Amendment). The amendment – on the ballot Nov. 4 – would direct an estimated $1.7 billion annually from oil and gas tax revenues in the state’s Rainy Day Fund to the Texas State Highway Fund and support investment in new highway/transportation construction and maintenance.
This will be the second tour through Texas for Dire States in support of Proposition 1. The first tour took place July 8-10.
Dire States is a grassroots effort by CASE to raise awareness for the role that state and local governments play in securing infrastructure investment, through legislative initiatives, public-private partnerships (P3s), state revolving funds and other innovative funding methods. The effort kicked off with a nationwide tour in 2013 by author and infrastructure expert Dan McNichol. McNichol circumnavigated the country in a 1949 Hudson that is as “old, rusty and energy defunct” as much of America’s infrastructure. McNichol and the Hudson will be at each of the Texas events.
“Like much of the country, Texas has underinvested in infrastructure,” says Lawrence Olsen, executive vice president, Texas Good Roads. “This amendment will serve as a good first step in providing new methods of investment – but it’s just that: a first step. Many state and independent organizations report significant funding gaps for years to come to simply maintain road and bridge maintenance/congestion at 2010 levels. Now is the time to build a better infrastructure for future generations.”
ASCO Equipment, a construction equipment dealer with 20 locations throughout Texas, recognizes the need for investment and the effect that it has on jobs and the state economy.
“There is a need for investment, and with that investment will come thousands of skilled jobs and increased investment in everything from manufacturing to aggregate production,” says Kirby Carpenter, strategic account manager, ASCO Equipment. “Infrastructure investment is a proven economy builder and this amendment is a much-needed shot in the arm for infrastructure investment in Texas.”
“While we fully support and recognize the need for infrastructure investment at the federal level, states and municipalities must stand up and find new ways to invest to achieve safe and modern infrastructure systems,” says Jim Hasler, vice president, CASE Construction Equipment. “This includes everything from roads and bridges to energy transportation/distribution, ports, waste systems and transit. Texas – recognizing the need with this ballot initiative – is doing so without any additional cost to taxpayers. So, CASE and Dire States will be there to support it.”
The July tour featured McNichol and his 1949 Hudson, as well as speakers from Texas Good Roads, ASCO Equipment and other partner associations throughout the state. The initial blitz included seven events in three days.
The September tour dates and locations are as follows:
Monday, September 22
11:30 AM: Luncheon at Texas Star (1400 Texas Star Parkway) in Euless
2:30 PM: Reception in Sherman (118 W. Lamar)
5:00 PM: Reception at the Lamar County Chamber of Commerce (8 W. Plaza) in Paris
Tuesday, September 23
7:30 AM: Breakfast at Texas A&M Texarkana (7101 University Ave.) in Texarkana
12:00 PM: Luncheon at Willowbrook Country Club (3205 W. Erwin St.) in Tyler
Wednesday, September 24
7:30 AM: Breakfast at Crown Colony Country Club (900 Crown Colony Drive) in Lufkin
11:30 AM: Luncheon at Ritchie Bros. Auctioneers (15500 Eastex Freeway (Hwy 59 N.) in Humble
For more information on Dire States, visit DireStates.com​​.
Racine, Wis., Sept. 18, 2014