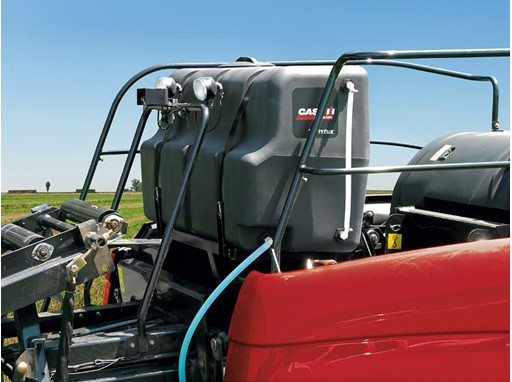 Hay preservative application is easier and more precise than ever with the new 600 Series Automatic Applicator System for Case IH large square balers. The new system integrates seamlessly with the Case IH AFS Pro 700 control center for highly efficient and precise application of hay preservative, without the need for a separate monitor in the cab.
"The new 600 Series Automatic Applicator System is a substantial upgrade from the previous system,” says Cole Carling, Case IH hay and forage marketing manager.  “It accurately senses moisture on-the-go and adjusts the application of preservative every three seconds to match the condition of the hay. This precision lets you apply the exact amount of preservative that’s needed to keep the crop in great condition without wasting product.”
The application system uses sensors that directly interface with the baler and tractor to determine hay moisture content, speed of baling in terms of tonnage, how much preservative is being applied, and total tons baled.
The system can also store up to 300 job records by field, including the date and time of baling, number of tons baled, product used, and overall moisture levels. Within those job records, the system also can store up to 33,000 individual bale records. Records can be downloaded via a USB port for easy and efficient access to crucial bale data.
Case IH developed the new system in collaboration with Harvest Tec, the industry leader in hay preservative and the exclusive supplier of ThirtyPlus™ hay preservative. Producers use ThirtyPlus™ hay preservative to bale hay with moisture content up to 30 percent without worrying about dangerous heat levels or toxic mold damage. ThirtyPlus™ is created from acetic acid and buffered propionic acid, which is also found naturally in the digestive system of horses, making it safe for livestock and also non-corrosive to baling equipment.
“Hay production is a highly time-sensitive process due to changing weather conditions and markets,” says Carling.  “The 600 Series Automatic Applicator System allows producers to take control of the process – by locking in quality hay that can be safely stored for years, and will still look and feed as well as when it was first baled.”
The 600 Series Automatic Applicator System also has the capacity for add-on features such as ProID™ bale taggers, dye sprayers, bale weight information and GPS yield mapping. For more information on the new 600 Series Automatic Applicator System, visit: http://www.harvesttec.com/caseih/.  To see the complete line-up of Case IH hay equipment, including the new LB4 large square baler, visit www.caseih.com or talk to your local Case IH dealer.
RACINE, Wis. (February 10, 2014)