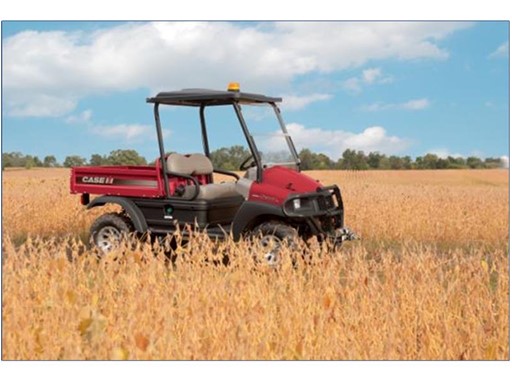 Strolling through the Case IH lot at Outdoor Farm Show in Ontario, Canada, paid off for Mark Taylor of Belmont, Ontario. Case IH recently awarded Taylor with a Case IH Scout™ utility vehicle as part of its fall farm show promotion.
“My wife actually answered the phone when Case IH called to tell us we won,” says Taylor. “We were so surprised that it seemed too good to be true. Once we realized it was the real deal, we were really excited.”
Taylor and his wife, Josepha, operate Taylor Farms and have three teenage children. The family grows corn, soybeans, dry beans, wheat and hay on their farm, and have a few chickens and rabbits that the kids raise. Taylor’s great-grandfather started the farm more than century ago.
The new Scout will be put to good use, since Taylor plans to mount a spreader on it and use it to spread clover on his wheat fields. He also says it will come in handy for picking rocks. It will be a vehicle that the whole family can enjoy.
“Our new Scout will match our new Case IH 8230 Axial-Flow® combine,” says Taylor. “Case IH is very generous for giving us this prize. We’re very thankful.”
RACINE, Wis. (April 30, 2014)