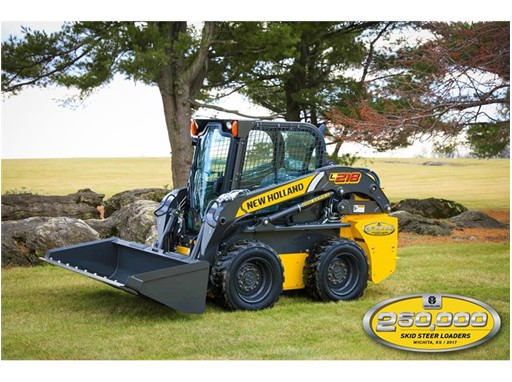 New Holland celebrates manufacturing milestone and 45 years of Super Boom loader
New Holland Construction is proud to announce that it has manufactured its 250,000th skid steer loader to date. New Holland Construction began skid steer manufacturing 45 years ago in its facility in Grand Island, NE. Skid Steer manufacturing eventually moved to Bellville, PA, and finally to a plant in Wichita, KS in 2002, where it is today.
“We’re excited to celebrate New Holland’s milestone of assembling its 250,000th skid steer loader and its long and ongoing commitment to providing quality skid steer loader equipment,” said Bret Lieberman, Vice President of New Holland Agriculture North America.
The L35, New Holland’s first skid steer loader, pioneered the use of a longer wheelbase for a smooth, steady ride for operator comfort and safety. New Holland also introduced ROPS/FOPS and boom lockouts for operator safety. Up until that safety innovation, all skid steer loaders were open-top designs, preventing the operator from being protected from falling material, loader arm pinch points, or machine rollover.
Developments from other New Holland products found their way to the L35; the hydrostatic drive system from a self-propelled windrower was incorporated into the L35, another industry first. These attributes are found in the current line-up of New Holland skid steer loaders and all of these traits have been adopted by other manufacturers. New Holland still prides itself as having the best reach with its Super BoomÒ design and keeping operator safety top of mind with in-cab boom lockout, which is still in production today.
In addition to this manufacturing achievement, New Holland Construction marks the 45th year anniversary of its patented Super Boom loader, a technology designed by engineer Larry Halls in 1960, whose project was to design a drive linkage for a mower that did not require a pitman arm. Halls devised a four bar link system which became patented and evolved into the Super BoomTM as we know it today.
The Skid Steer milestones follows the recent announcement recognizing the Wichita, Kansas manufacturing plant as a recipient of the Silver Level World Class Manufacturing (WCM) certification for the manufacturing of skid steer loaders and compact track loaders.
WCM is one of the global manufacturing industry’s highest standards for the integrated management of manufacturing plants and processes. It is a pillar-structured system based on continuous improvement, designed to eliminate waste and loss from the production process by identifying objectives such as zero injuries, zero defects, zero breakdowns, and zero waste. Determining factors for this latest achievement were due to a series of category improvements including Professional Maintenance, Level of Detail, and Motivation of Operators.
In addition to the skid steer loader, New Holland offers a full-line of light construction including Compact Track Loaders, Loader Backhoes, Mini Excavators, and Compact Wheel Loaders. For more information on New Holland’s light construction equipment offerings, visit construction.newholland.com.
For more information on New Holland Construction’s 250,000th Skid Steer Loader, visit: https://youtu.be/SeDuemyx8OA.
New Holland, Pa. (January 26, 2017)