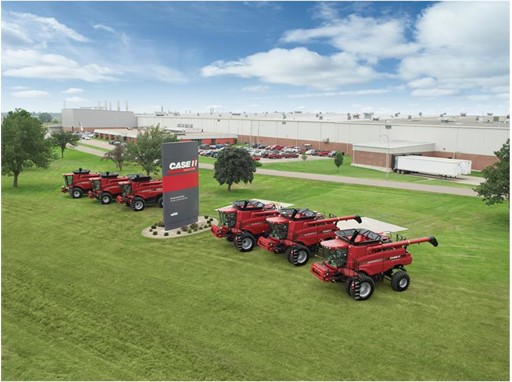 Case IH observed the Grand Island, Neb., plant’s milestone anniversary and success in manufacturing Case IH Axial-Flow combines.
Case IH celebrated an important milestone in Nebraska this weekend, marking 50 years of operations at its Grand Island plant during an event on Saturday, July 25. Today the plant produces Case IH Axial-Flow combines equipped with the industry’s largest grain tanks, engines and fuel tanks to match.
“Our brand is very proud of Grand Island’s accomplishments and their specialized expertise in world-class combine manufacturing which they have developed over the last half century,” said Eric Shuman, Case IH Sr. Director for Harvesting. “The Grand Island plant has been manufacturing Case IH Axial-Flow combines for the past 12 years and we have driven major advancements during that time both in the product design and manufacturing processes.”
Case IH Axial-Flow combine manufacturing started in Grand Island with the introduction of the AFX8010 series in 2003. The following year manufacturing of the 2388 Axial-Flow combine series relocated from East Moline, Ill. to Grand Island.
“Our modern combines started with Grand Island. Over the past decade, we’ve consistently focused on maximizing uptime for the customer, so this has led to a lot of improvements since the 2388. To minimize stopping during narrow harvesting windows, we increased the grain tank size over the years by 200 bushels to 410 on our current flagship 9240 combine as well as increasing the fuel tank size from 180 gallons to 317 gallons to give customers a full day of harvesting without stopping to refuel.
“Over the same time period, horsepower increased from 280 back in 2004 to 550 today thanks to the new Case IH FPT 15.9L engine. The patented SCR technology in today’s combines allows for maximum horsepower without compromising efficiency, resulting in better performance, increased fuel efficiency, lower operating temperatures, and greater reliability and durability.
“As a Case IH Center of Excellence, Grand Island also hosts product design and testing alongside manufacturing to ensure that we incorporate customer requirements and feedback into production as quickly and efficiently as possible.” This product specialization centered in Grand Island has led to many awards since production of Case IH Axial-Flow combines began there. Just last year the Case IH Axial-Flow 230 series earned recognition for its innovative design in the USA, Spain, and the United Kingdom for the best-in-class grain handling system and a ground-breaking pivoting grain spout, features developed in Grand Island. We anticipate similar accolades when the new 2016 model year combines launch this fall,” says Shuman.
For more information about Axial-Flow 140 and 240 series combines, contact your local Case IH dealer or visit www.caseih.com​.
RACINE, Wis. (Jul. 27, 2015)