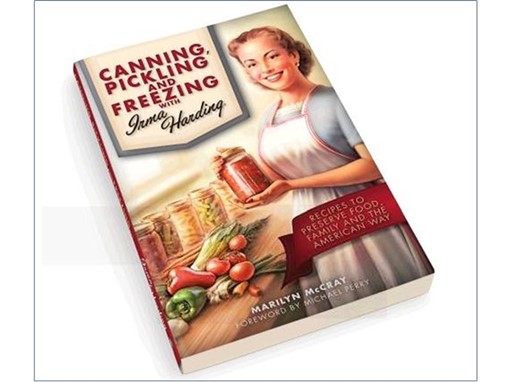 Irma Harding® is back in the kitchen with the new recipe book Canning, Pickling & Freezing with Irma Harding.
In this recipe book, Irma Harding leads readers through more than 250 pages of step-bystep instructions on preserving fresh foods. The recipe book explains the basics of canning, pickling and freezing, in addition to smoking and curing fresh fruits, vegetables and meats.
“This recipe book captures the spirit of what Irma Harding was created to do – educate people on freezing and preserving foods for future use,” says Sarah Pickett, Case IH Licensing & Merchandising Manager. “In the past, canning, pickling and freezing were used out of necessity. Today, there’s a renewed interest in these “old-fashioned” food preservation techniques. This recipe book has something to offer everyone, from the experienced canner to a beginner.”
Published by Octane Press, the recipe book features more than 100 color images and drawings that bring food preservation into the modern era. Authored by Marilyn McCray, the recipe book also features a foreword by The New York Times best-selling author Michael Perry. An Irma Harding calendar will follow the recipe book.
The recipe book is available for purchase at your local Case IH dealer, on www.shopcaseih.com​ or at Octane Press’ website, www.octanepress.com​.
Be sure to check out the Irma Harding modern vintage dishware, available on www.shopcaseih.com​.
For more information on Irma Harding, visit irmaharding.tumblr.com.
In 1947, International Harvester developed refrigerator and freezer lines and created Irma Harding as the character spokeswoman. Irma promoted the products to U.S. farm women.
International Harvester hired five home economists to answer inquiries and conduct cooking experiments in company kitchens on Irma’s behalf. In addition, 70 home economists and saleswomen were hired throughout the U.S. to travel regionally and educate homemakers of the day about freezing and preserving food.
With a persona that is deeply rooted in America’s rural history, the products Irma now represents invoke memories of all that was and still is good in American households and homemaking.
RACINE, Wis. (May 12, 2014)